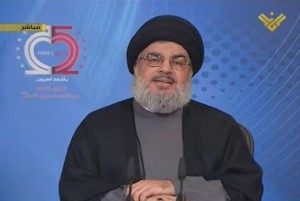 The head of the Hezbollah militant group and key Damascus ally Hassan Nasrallah accused Saudi Arabia of blocking a political solution to the conflict in Syria.

During a televised speech marking the 25th anniversary of the establishment of the Great Prophet Hospital Nasrallah said the Gulf kingdom was “furious because the situation in Syria has not worked out in its favor”.

Saudi Arabia has been a key backer of rebel groups fighting to topple the government of Syrian President Bashar al-Assad since March 2011.

“Today, political dialogue and the search for a political solution are enjoying international, regional and interior support … but there is a state in the region which is furious (about the proposed Geneva II peace conference), and its name is Saudi Arabia,” Nasrallah charged.

Relations between Washington and Riyadh have reportedly been strained since the US backed away from military action against Assad over alleged chemical weapons attacks in August.

Ties have worsened further between the two allies over Washington’s recent engagement with Iran, which is Saudi Arabia’s arch-foe in the region.

Nasrallah said that the oil-rich Gulf kingdom had sent foreign fighters, weapons and money to back Syrian rebels fighting the government in Damascus to bring about Assad’s fall.

“But it didn’t work,” said Nasrallah, who has admitted sending Hezbollah fighters to battle alongside government troops in Syria as they seek to crush rebel forces.

“The region cannot be torn apart by war because a state is furious and is trying to hinder any political dialogue and push back Geneva II,” he said.

“Their obstinacy is pointless,” he added.

He stressed that only a “political solution” could resolve the civil war in neighboring Syria.

The Geneva talks slated for next month aim to bring rebel and regime representatives to the table in a bid to seek a negotiated end to the Syrian conflict, which according to a rights group has claimed more than 115,000 lives since March 2011.

Nasrallah said that Hezbollah was “advising” the March 14 alliance to join a cabinet on its terms, adding that the situation in Syria would not turn in favor of March 14, which opposes the Bashar al-Assad regime.

“March 14 made failed bets since 2005 and now you are betting on Syrian events, and today I tell you that these bets have also failed.”

“We [currently] accept the 9-9-6 formula [for cabinet formation], but when conditions change we might no longer accept it; take advantage of the opportunity,” the Hezbollah chief

“We are being humble by accepting this formula, and now it is your turn to be humble and accept it. Doesn’t this country deserve some sacrifice from you?” He added: “We won’t present any sacrifices as we have already presented enough of them,” Nasrallah said

Nasrallah also attacked the state accusing it of failing to address the networks that are planting booby-trapped cars in Lebanon.

He said: “The state is aware of the activity of these networks, but is not lifting a finger to stop them.”

“The state is aware of the various security threats in Lebanon and it cannot be selective in tackling them,” he added.

He demanded that the caretaker government convene in order to address security threats, saying: “It should not convene only after an explosion takes place. These issues cannot be postponed.”

Addressing the clashes in the northern city of Tripoli, Nasrallah urged the cabinet to take a “firm decision” to put an end to the instability in the city.

“The army and security forces should take over control in Tripoli and the people should provide them with the necessary support while they perform their duties,” he continued.

Nasrallah also called on the caretaker cabinet to meet urgently to tackle outstanding issues, including those of offshore oil exploration and security, but added that Caretaker Prime Minister Najib Mikati is being pressured by Saudi Arabia and the March 14 camp against calling cabinet to session.

His comments come as Miqati has not chaired sessions on furthering along the oil exploration process amid political fighting over Energy Minister Gebran Bassil’s stewardship of the ministry handling the oil file.