Brahimi arrives in Damascus, Syria for talks with Assad, FM 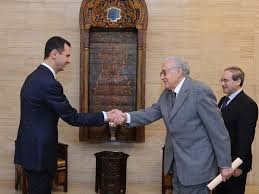 The UN-Arab League envoy Lakhdar Brahimi arrives in Damascus for talks with Syrian government officials, amid reports of fierce fighting in and around the capital city.

In his visit, which starts on Monday, he is expected to meet Syrian President Bashar al-Assad and Foreign minister Walid al-Muallem.

Brahimi has been trying to build support for peace talks planned in Geneva next month between the government and the opposition.

The so-called Geneva II peace talks, backed by Russia and the US and due to take place on November 23, have been repeatedly postponed amid wrangling among the Syrian opposition, and a dispute over which countries, including Iran, should participate.

Making the task harder for Brahimi has been the refusal of 19 powerful rebel groups in Syria to take part in the conference, saying that negotiating with the Assad government would be an act of betrayal.

“We consider it just another part of the conspiracy to throw our revolution off track and to abort it,” said a joint video statement read out by Ahmad Eissa al-Sheikh, head of the Suqur al-Sham brigade.

They gave warning in the statement, posted online on Sunday, that anyone who attends such talks would be committing “treason, and … would have to answer for it before our courts”.

Brahimi’s visit comes amid heavy fighting between Assad troops and rebel forces in and around Damascus.

Al Jazeera’s correspondent in Damascus reported fighting in Barza, a district in Damascus that the rebels have been trying to storm, in the rebel-held town of al-Kiswa, and in the government-controlled town of Darayya in Damascus’s outskirts.

The clashes come a day after opposition activists reported the death of Shia fighters from the Lebanese Hezbollah armed group after rebels blew up a building where they were based in Damascus’s Saida Zeinab district.

Assad’s forces, backed by Shia fighters from Lebanon, Iraq and Iran, have been gaining ground around the capital since last month, storming several rebel-held suburbs and choking off supplies to others in the east and south.

Although neither side appears to have the strength to gain a decisive edge over the other in the two-and-a-half-year-old, the government’s offensive has bolstered its position in the lead-up to the expected international peace talks.

The visit of Brahimi to Damascus is part of an extensive regional tour. He has already visited Iraq, Egypt, Kuwait, Oman and Qatar.

He met Iranian President Hassan Rouhani on Sunday and told him that his the presence of Iran, a key Assad ally, is necessary for the Geneva talks to succeed.

He also met King Abdullah II, the leader of Jordan, a country hosting over half a million Syrian refugees, few days earlier.

Last week, Brahimi held talks with leaders of the Free Syrian Army in Turkey and other military commanders fighting against the Assad government.

Brahimi flew in to Beirut on Monday on his way to Damascus to try to whip up support for a peace conference on Syria.
He arrived from Tehran, where he said it was “necessary” for Iran, a key ally of the Damascus regime, to take part in an international peace conference aimed at ending Syria’s two-and-a-half-year conflict.

Brahimi traveled on Monday from Beirut overland to Damascus, making his first visit to Syria since last December.

Prior to departing for Syria, Brahimi held talks with U.N. Special Coordinator for Lebanon Derek Plumbly at the Beirut airport.

Brahimi did not make any statements following the meeting, telling reporters only that he would “talk once I am back from Syria.”