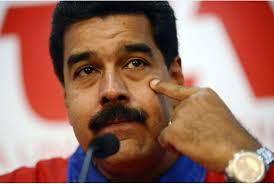 Americans may insist on the right to pursue happiness, but Venezuela now has a formal government agency in charge of enforcing it.

Wags had a field day Friday, waxing sarcastic on Twitter about how happy they felt less than 24 hours after the announcement.

Oil-rich Venezuela is chronically short of basic goods and medical supplies. Annual inflation is running officially at near 50 percent and the U.S. dollar now fetches more than seven times the official rate on the black market.

“That would make me, and all the drunks, happy,” he said.

A TV journalist whose show was recently forced off the air after he refused to censor political opponents of the ruling socialists, Leopoldo Castillo, called Maduro’s announcement an international embarrassment.

Housewife Liliana Alfonzo, 31, said that instead of a Supreme Happiness agency she’d prefer being able to get milk and toilet paper, which disappear off store shelves minutes after arriving at stores.

“It’s a Calvary getting the ingredients for any meal,” she said.

Maduro blames the shortages on speculation and hoarding, but merchants say they would go broke if they adhered to government price controls.

Chavez spent billions on social programs, from benefits for single mothers to handouts of apartments and major appliances.