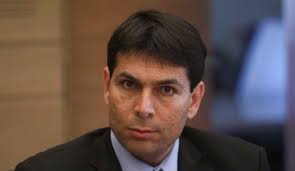 A new report that says Iran may need as little as a month to produce enough uranium for a nuclear bomb is further evidence for why Israel will take military action before that happens, an Israeli defense official said Friday.

“We have made it crystal clear – in all possible forums, that Israel will not stand by and watch Iran develop weaponry that will put us, the entire Middle East and eventually the world, under an Iranian umbrella of terror,” Danny Danon, Israel’s deputy defense minister told USA TODAY.

Iran is developing and installing new and advanced centrifuges that enable Iran to enrich even low-enriched uranium to weapons grade uranium needed for nuclear weapons within weeks, Danon said.

“This speedy enrichment capability will make timely detection and effective response to an Iranian nuclear breakout increasingly difficult,” he said.

“Breakout” refers to the time needed to convert low-enriched uranium to weapons-grade uranium. On Thursday, the Institute for Science and International Security issued a report stating that Iran could reach that breakout in as little as one month based in part on Iran’s own revelations about its nuclear program.

“If they use all their centrifuges … and their stockpiles of low- and medium-enriched uranium, that would take one to 1.6 months,” said David Albright, president of the institute and a former inspector for the U.N. International Atomic Energy Agency.

The report comes as the White House is trying to persuade Congress not to go ahead with a bill to stiffen sanctions on Iran to force it to open up its program to inspection. The White House on Thursday invited senate staffers to a meeting on Iran strategy for negotiations that are to resume next month with Iran, it said.

In discussing Iran strategy, President Obama has said Iran is a year or more away from having enough enriched uranium to make a bomb.

Bernadette Meehan, an spokeswoman for the administration’s National Security Council, said the intelligence community maintains “a number of assessments” regarding potential time frames for Iran to produce enough weapons-grade uranium for one weapon or a testable nuclear device.

“We continue to closely monitor the Iranian nuclear program and its stockpile of enriched uranium,” Meehan said.

In the report, Albright said negotiations with Iran should focus on lengthening Iran’s breakout time. ISIS’ analysis is based on the latest Iranian and United Nations reports on Iran’s centrifuge equipment for producing nuclear fuel and its nuclear fuel stockpiles.

Iran’s stockpile of medium-enriched uranium has nearly doubled in a year’s time and its number of centrifuges has expanded from 12,000 in 2012 to 19,000 today.

Sen. Mark Kirk, an Illinois Republican whose Senate Banking Committee is considering legislation to tighten Iran sanctions, said the report shows that Iran is expanding its nuclear capabilities under the cover of negotiations.

“The Senate should move forward immediately with a new round of sanctions to prevent Iran from acquiring an undetectable breakout capability,” he said. The House has already passed legislation to toughen sanctions.

Iranian President Hassan Rouhani has said his country has no interest in nuclear weapons but that producing nuclear fuel is Iran’s right. However, Iran has blocked international inspectors from some suspected nuclear facilities, making it impossible to determine whether it is complying with the Nuclear Non-Proliferation Treaty it has signed.

United Nations inspectors say they have found evidence of a weapons program in violation of Iran’s commitment under the treaty. The USA and the U.N. Security Council have implemented economic sanctions on Iran to persuade it abide by its obligation and verify it is not developing a bomb.

Albright says negotiations with Iran should focus on establishing protocols that lengthen the time period that it would take Iran to convert uranium to weapons grade uranium.

“An essential finding is that they are currently too short and shortening further,” stated the report by the Institute for Science and International Security.