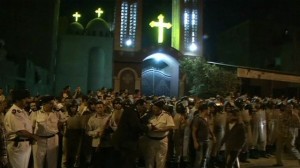 Three people, including a girl aged eight, died when gunmen on motorcycles opened fire on a wedding party outside a Coptic Christian church in Cairo.

At least nine others were wounded in the attack in Giza, officials said.

There was no immediate claim of responsibility.

Egypt’s Coptic Christian community has been targeted by some Islamists who accuse the Church of backing the army’s overthrow of President Mohammed Morsi in July.

The unidentified attackers fired indiscriminately as people left the church.

A man and a girl were killed outside the church and a woman died on her way to hospital.

“We heard a very loud sound as if something was collapsing,” one eyewitness said.

“I found a woman seated in a chair with lots of bullet wounds, covered in blood. Many other people had fallen around her, including a child,” he added.

Coptic priest Thomas Daoud Ibrahim said he was inside the church when the gunfire erupted.

“What happened is an insult to Egypt, and it’s not only directed against Coptic Christians. We are destroying our own country,” he said.

Another priest, Beshay Lotfi, told Egyptian media that the church had been left without a police guard since the end of June.

The Coptic Orthodox Church is one of Christianity’s oldest, founded in Alexandria around 50 AD.

Christians make up at least 10% of the population in Egypt, or well over eight million people.

When the chief of the army, General Abdul Fattah al-Sisi went on television to announce that President Morsi had been removed from power, Pope Tawadros II appeared alongside him.

Pope Tawadros said that the “roadmap” mentioned by the general had been devised by honourable people, who had Egypt’s best interests at heart.

Some Islamists took this as a sign that the Church had conspired in their leader’s overthrow.

Pope Tawadros has received death threats, while several Christians have been killed. Christian shops, homes and businesses have also been targeted.

Egypt’s interim prime minister has condemned the attack outside the Cairo Coptic church that killed three people, pledging police would do everything possible to bring the perpetrators to justice.

Prime Minister Hazem el-Beblawi said in a statement on Monday that the attack on Sunday night was a “callous and criminal act.”

He says such attacks will “not succeed in sowing divisions between the nation’s Muslims and Christians.”