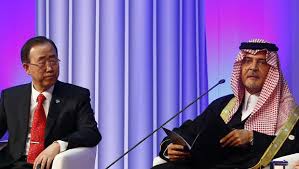 The Arab Group at the United Nations urged Saudi Arabia on Saturday to reconsider its decision to renounce a rotating seat on the Security Council to protest the 15-nation body’s failure to end the war in Syria and act on other Middle East issues.

“We hope that they (Saudi Arabia), which are amongst the blessed who represent the Arab and Islamic world at this important and historical stage, specifically for the Middle East region … maintain their membership in the Security Council,” the Arab Group’s statement said.

The group appealed to the Kingdom to “continue their brave role in defending our issues specifically at the rostrum of the Security Council.”

The Arab Group includes Arab U.N. member states with the exception of Syria, whose membership was suspended when it was frozen out of the Arab League.

Diplomats said Washington would like the Saudis to keep the council seat.

No country has ever been elected to the Security Council and not taken the seat. As an incoming Security Council member, Saudi Arabia would have taken up its council seat on Jan. 1 for a two-year term ending on Dec. 31, 2015.

When it announced its decision on Friday to refuse its newly won council seat, the Saudi Kingdom condemned what it called international double standards on the Middle East and demanded reforms in the Security Council, which has been at odds on ways to end the fighting in Syria.

Unlike in the past, when Riyadh’s frustration was mostly directed at Russia and China, it is now also aimed at Washington, its oldest international ally, which has pursued policies since the Arab Spring that Saudi rulers have bitterly opposed.

Citing the Security Council’s failure to resolve the Israeli-Palestinian dispute, take steps to end Syria’s civil war and stop nuclear proliferation in the region, Riyadh said the body had instead perpetuated conflicts and grievances.

The Saudis have expressed disappointment at U.S. President Barack Obama’s failure to push Israel to end settlement building in the West Bank and agree to a Palestinian state. The Obama administration has blocked the Palestinians’ push for full U.N. membership and vetoed a resolution condemning settlements.

Western U.N. diplomats, suggested, however, that Riyadh’s frustration with the United States had more to do with Syria and Iran than U.S. policy on the Israeli-Palestinian conflict and peace process, which has been relatively consistent for decades.

They said the recent U.S.-Russian deal to eliminate Syria’s chemical weapons, which appeared to break a long-standing impasse on the council over Syria’s 2-1/2 year civil war, might have led the Saudis to conclude Washington is coming around to Russia’s position that it might be better to let Syrian President Bashar al-Assad remain in place.

Blood-drenched images of Syria’s civil war, in which more than 100,000 have died and in which millions have been displaced, are aired daily on Saudi news and the Kingdom has backed the rebels with arms and money. Assad’s ally Russia continues to support Assad’s government with weapons.

Saudi anger boiled over after Assad escaped U.S.-led military strikes in response to an Aug. 21 sarin gas attack near Damascus by agreeing to give up his chemical arsenal.

Saudi concerns that the U.S. decision to avoid striking Syria demonstrated weakness were underscored by signs of a tentative reconciliation between Washington and Tehran, something Riyadh fears may lead to a “grand bargain” on Iran’s nuclear program that leaves Gulf Arab states at a disadvantage.

Earlier this week, the United States praised Iran’s approach to negotiations with six world powers on its nuclear program during two-day talks in Geneva. Last month, Obama spoke on the telephone with Iran’s new president, Hassan Rouhani, the first contact between U.S. and Iranian heads of government since the 1979 Islamic Revolution.

If the Saudis insist on giving up their seat, the Asia Group will likely find another Arab candidate from the Middle East to take it. Any replacement candidate would likely need to be elected with a two-thirds’ majority in the U.N. General Assembly.