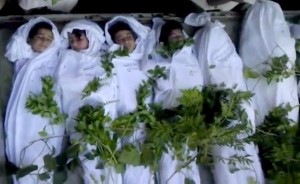 BEIRUT, Lebanon — Amid all the bloodshed, confusion and deadlock of Syria’s civil war, one fact is emerging after 2½ years — no conflict ever has been covered this way.

Amateur videographers — anyone with a smartphone, Internet access and an eagerness to get a message out to the world — have driven the world’s outlook on the war through YouTube, Twitter and other social media.

The tens of thousands of videos have at times raised outrage over the crackdown by the regime of President Bashar Assad and also have sparked concern over alleged atrocities attributed to both sides.

The videos have also made more difficult the task of navigating between truth and propaganda — with all sides using them to promote their cause. Assad opponents post the majority of videos, and nearly every rebel-held area or brigade has a media office that produces and disseminates them. To a lesser degree, regime supporters produce some videos — but they also pick apart opposition videos, trying to show they are fake.

In the Vietnam War, the 1991 Gulf War and the second Gulf War in 2003, foreign media directly covered the conflicts, often with reporters embedded with or accompanying the American military.

Media organizations, including The Associated Press, have sent teams to Syria to cover events directly, often at great risk. But they are for temporary stints and are limited both by government regulations and by war zone dangers, ranging from random bombardment to kidnappings. At least 28 journalists were killed in Syria in 2012.

That has forced international media to cover the war to a large extent from the outside, and the flow of videos is one element taken into account in the reporting.

The videos have undeniably ensured that details of a bloody conflict that has killed more than 100,000 people and ravaged the country do not go unnoticed, providing a look at the horrors of war: villagers digging with through destroyed buildings with their bare hands for survivors; massacre victims in pools of blood; children with grave wounds from heavy bombardment.

“In the past, if the media wasn’t there to cover an event, it was like it never happened,” said Yuval Dror, head of the digital communication program at Israel’s College of Management Academic Studies.

The phenomenon of amateurs chronicling the war themselves “is changing the rules of war,” he said. “There are no restrictions. It’s cheap, it’s easy and you don’t need permission from anyone to do it.”

Magda Abu-Fadil, veteran journalist and director of the Beirut-based Media Unlimited, said that while some professionals in the field have covered the war, it has mostly been “citizen journalists, activists, warriors and anybody with a mobile device, Internet connection or functioning telephone line.”

“We’re being bombarded with messages from every direction at breakneck speed, the likes of which we’ve never seen before,” she said.

The world’s response to the use of chemical weapons in Syria was driven in part by opposition activists documenting a suspected sarin attack outside Damascus on Aug. 21, with images of choking, convulsing victims, as well as the bodies of victims, including children. The Syrian government denied it was behind the attack, blaming it on extremists among the rebels.

The U.S. and its allies used those videos to build a case against Damascus, at first threatening to bomb Assad regime targets in retaliation, then agreeing to a compromise by which Syria would join the international treaty banning chemical weapons and give up a toxic arsenal it long kept secret.

The White House assessment on the attack cited more than 100 videos and “thousands of social media reports from at least 12 different locations in the Damascus area,” along with other U.S intelligence information. The report said the opposition “does not have the capability to fabricate all of the videos, physical symptoms verified by medical personnel and NGOs, and other information associated with this chemical attack.”

Jamal Flitani, a 24-year-old video activist, was among those who rushed to Damascus suburbs of Zamalka and Ein Tarma to record the aftermath of the attack.

“I honestly never thought our videos would be adopted by the U.S. administration and Western governments. … We were simply doing our duty,” he said.

Flitani is an engineering student, but when the uprising against Assad began in early 2011, he and his friends began shooting video of protests with their cellphones.

“Only after we saw similar videos and photos being used on satellite TVs and international agencies, only then did we start realizing the importance of our work,” added Flitani, who now heads an opposition media office in Douma.

Almost every opposition-held neighborhood now has a media center complete with high-definition cameras, satellite connections and software for secure uploading, many of them funded by Gulf Arab supporters. Syrian video activists regularly receive training from NGOs, with funds from abroad.

The government and its supporters regularly post images and videos of rebel bombings inside regime-held territory. State media even airs rebel video claiming to show regime massacres, bringing in analysts to dissect the videos and suggest forgery.

Government supporters challenged the video of the Aug. 21 attack. Mother Agnes Mariam al-Salib, a Catholic nun who has lived in Syria for decades, produced a detailed study after poring over dozens of the videos, citing alleged discrepancies she said showed they were staged. Russian Foreign Minister Sergey Lavrov cited her report to back up claims rebels carried out the gassing.

“We’re not like the American administration. We’re not social media administration or government. We are the government that deals with reality,” he said in an interview with CBS News last month.

The videos can be a double-edged sword. They provide a crucial glimpse into the war and sectarian massacres that may otherwise have remained secret, but they also are a potentially warped vision.

Several videos on social media sites turned out to be hoaxes, including one that purported to show soldiers burying a rebel alive, and another that alleged to show Assad supporters pouring fuel on prisoners, striking a match and burning them.

The news media’s use of YouTube video as a primary source “is really unexplored territory,” said Philip Seib, professor of journalism and diplomacy at the University of Southern California’s Annenberg School for Communication and Journalism.

“One of the biggest issues involves verifying the content because sometimes you don’t know where these YouTube videos are coming from,” Seib said. “There is a higher responsibility for the news organizations that decide to disseminate YouTube videos to verify before they disseminate it.”

Asked if this is the first time a conflict is being mainly covered by YouTube and social media, Seib said, “In terms of the heavy reliance on YouTube, it probably is.”

But he added that there should be caution about “overstating the influence of YouTube. I think it is a big factor but not the determinative factor in shaping opinion about the war.”

YouTube, an arm of Google, Inc., did not immediately reply to emails from The Associated Press seeking comment.

Like most news organizations, the AP runs user-generated content to supplement its own newsgathering. It only uses the material from channels that have proven reliable in the past, with video that has been authenticated and verified, and always works to ensure the content is aligned with its own reporting.

The AP also has a correspondent based in Damascus and uses a variety of other sources of information, including U.N. agencies, NGOs and relief and aid organizations, as well as journalists, doctors and others inside Syria. In addition, AP monitors Syria’s state-run media for the government perspective and images, and AP teams have made numerous trips to Damascus when given permission from the Assad administration.

Elliot Higgins, author of the popular Brown Moses blog, which has tracked the civil war since March 2012, said he scrutinizes videos for potential problems, including comparing them to satellite imagery. From his home in England, he monitors 650 YouTube channels daily, looking for images of types of arms being used and the evolution of rebel groups.

Syria imposed a near blackout at the beginning of the uprising in 2011, expelling foreign journalists. The government continues to restrict the movements of local and foreign media, who have to go through a stifling process to get visas to Damascus. Journalists who sneak into opposition-held territory through Turkey face the threat of arrest, kidnapping, injury and death.

The proliferation of amateur videos is all the more striking in a country like Syria, which had been a closed society for so long. When Assad’s father, Hafez, crushed a 1981-82 uprising in the city of Hama, killing thousands of civilians, he was able to keep it almost completely hidden from the world. To this day, the final death toll is not known.

According to the Committee to Protect Journalists, Syria is the most dangerous place in the world for journalists, with at least 28 killed and 21 abducted by various sides of the conflict in 2012 alone.

To Dror, the absence of more traditional media has compelled citizens to try to fill the void.

“It has almost become a survival mechanism for them. If the world didn’t know, it wouldn’t act,” he said.

Photo: This file image purports to show the funeral of children in Daraya, near Damascus, Syria.