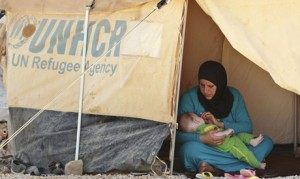 The international human rights group said in a new report that a recent spate of deaths involving refugees and asylum-seekers trying to cross the Mediterranean Sea from North Africa “throws a spotlight on the tragic consequences” of Egypt’s increasingly harsh stance toward those seeking haven from Syria’s devastating conflict.

About 300,000 Syrians have fled to Egypt, where they were once welcomed. But as their numbers have swelled, public sentiment has shifted sharply. Official media outlets routinely revile the refugees as partisans of the Muslim Brotherhood, the Islamist movement that propelled now-deposed president Mohamed Morsi to power, and they are accused by authorities of representing a threat to public order.

“Instead of offering vital help and support to refugees from Syria, the Egyptian authorities are arresting and deporting them,” said Sherif Elsayed Ali, the group’s chief representative on refugee and migrants’ rights. “Failing to help and protect them is a stain on the reputation of Egypt, and could seriously damage its image as a key stakeholder in the region.”

Amnesty International documented numerous cases of family members being separated in detention, including very young children denied access to their mothers; of refugees being deported or remaining locked up even after public prosecutors authorized their release; and of detainees being denied legal representation.

A Foreign Ministry spokesman, Badr Atty, disputed the report’s findings. He said only small numbers of refugees had been detained, and that any arrests were due to involvement in violent protests. He also said a limited number of deportations had taken place when refugees arrived at Cairo’s international airport without an entry visa obtained abroad.

“Our brothers and cousins from Syria are welcome here, and they are being treated as we treat our own citizens,” he said. “They are mainly living quiet lives.”

However, the distaste with which refugees are now viewed by many ordinary Egyptians plays out daily in ugly street scenes. In a leafy suburb of Cairo, a trio of black-clad Syrian women timidly approached shoppers leaving an upscale market to beg alms for this week’s Eid al-Adha, one of the most important holidays of the Muslim year, and one associated with feasting and charitable acts.

“Get away from me,” one man snapped, waving them aside. “Go to your friends in the Brotherhood.”