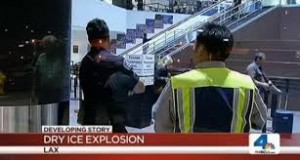 A dry ice bomb exploded Monday about 8:30 p.m. in a section accessible only to employees near the gate of the Tom Bradley International Terminal, law enforcement authorities said.

Two similar devices were found in the area. All three were bottles with dry ice inside, according to LAX police.

The devices appeared to be outside the terminal near planes, according to television news footage.

No injuries were reported, police said, adding that there was minimal disruption of normal airport activities.

On Sunday night, a dry ice bomb exploded about 7 p.m. in a restroom at Terminal 2, which is home to several international and domestic airlines.

Officials said an airport employee heard an explosion in a men’s room and went to investigate. He discovered a 20-ounce plastic bottle that had contained the dry ice. The blast did no damage, and no injuries were reported.

That area is also off limits to the public, police officials said.

On Monday night, detectives from the Los Angeles Police Department’s Criminal Conspiracy Section were investigating how the bombs were placed in security areas.

“Apparently there is no nexus to terrorism right now,” LAPD Det. Gus Villanueva told The Times.

The FBI was assisting the LAPD in the investigation.

Depending on the circumstances of the crime, suspects could be tried in state or federal court once they are arrested and charged, said Laura Eimiller, an FBI spokeswoman in Los Angeles.