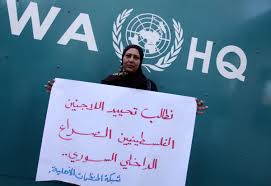 The Syrian conflict is “devastating” the lives of Palestinian refugees in the country, a UN agency said Monday, after weekend shelling of a Palestinian camp in the southern province of Daraa.

“The armed conflict is devastating Palestinian lives and homes,” it said, adding that Saturday’s violence in Daraa also damaged a health centre and a women’s program centre.

Michael Kingsley-Nyinah, director of UNRWA affairs in Syria, also urged an end to fighting in the camps.

“UNRWA repeats its calls on all parties to desist from conducting armed conflict in Palestine refugee camps and other civilian areas and to comply with their obligations under international humanitarian law,” he said.

UNRWA’s statement comes two days after government warplanes and tanks pounded parts of the Daraa camp amid fierce clashes pitting rebels against regime loyalists, according to the Syrian Observatory for Human Rights.

Other Palestinian camps in Syria have also suffered extensive damage during the 31-month conflict.

But because of ongoing violence there, UNRWA says it is very difficult to assess the damage.

Among the affected camps is Yarmuk, in southern Damascus, which was once home to some 150,000 people.

After all-out violence broke out there late last year, tens of thousands fled.

According to activists, some 30,000 people remain in Yarmuk, which is heavily besieged by troops loyal to President Bashar al-Assad.

The camp is scene of frequent violence and shelling, as pro- and anti-regime groups fight for control over it.

Because of the siege, “nothing, not even bread or flour has been allowed in for 96 days”, said Palestinian-Syrian activist Ali Abu Khaled, who spoke to AFP via the Internet.

“The humanitarian situation here is tragic,” said the Yarmuk-based activist, who said he is “lucky to get a small meal a day”.

Nearly 500,000 Palestinians are registered as refugees in Syria. Their ancestors fled their homes when the state of Israel was created in 1948, and in successive conflicts afterwards.

Tens of thousands of Palestinian residents of Syria have fled the country for neighboring states such as Lebanon, becoming refugees for the second time.

Palestinians trying to escape Syria face even worse restrictions than the more than two million Syrians fleeing the war-torn country.