In Malaysia Catholics can’t use ‘Allah’ 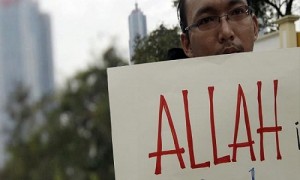 “It is our common finding that the usage of the name ‘Allah’ is not an integral part of the faith and practice of Christianity,” said the ruling from a three-member judge panel Monday.

The legal dispute dates to 2007: After Syed Hamid Albar, then the home minister, prohibited the church’s newspaper Herald from using the word—arguing it should be solely for Muslims—the Archbishop of Kuala Lumpur, Murphy Pakiam, filed a lawsuit to overturn his decision. In 2009 the High Court found the Roman Catholic Church’s use of the word constitutional, a ruling that sparked arson and other vandalism targeting both Christian and Muslim properties, including places of worship.

Early the next year the same court ordered the Herald not to use the word while the government appealed the decision.

“I am not discouraged, but dismayed and disappointed that a judgment (could) be made in a manner where the usage of ‘Allah’ is allowed in the Malay-language Bible but for the weekly (publication) it is prevented,” said Father Lawrence Andrew, editor of the Herald. The newspaper plans to appeal the ruling to the highest court, he added.

“Allah” (Arabic for “God”) is used in prayers and rituals as well as in everyday speech in Malay, by Muslims and non-Muslims alike. Arabic-speaking Christians also use the word. It was introduced to Southeast Asia by Muslim traders around the 12th century and was adopted by local converts to the faith, who didn’t have the concept, or a word, for a single deity.

“Tuhan” (Malay for “Lord”) is one alternative, but Catholic officials have said it isn’t an accurate translation. Some conservative Islamic leaders disagree, saying that Muslims could be misled by Christians using “Allah” and that it should be reserved for Islam alone. The Christian Federation of Malaysia said that about 60% of the approximately 2.6 million Christians in the country use the word “Allah” to refer to God.

In its arguments before the appellate court last month, the Roman Catholic Church noted that the word has been used for centuries by the Malay-speaking Christian community. The government argued that the then-home minister didn’t act in bad faith when he restricted the use of the word because he was seeking to maintain security and public order. It also argued that the word is specific to Muslims.

“In every case we expect the right thing to be done,” one of the church’s lawyers, S. Selvarajah, said after the ruling. “But in this case it was not.”

Religious identification is a highly charged issue in Malaysia, which has long tried to maintain a balance between ethnic and religious groupings. Christians account for about 9% of the population; Buddhists and Hindus number in the tens of thousands.

Over the past weeks, Prime Minister Najib Razak has sought to consolidate his support among the Malay Muslims—the traditional supporters of his political party—ahead of a crucial party assembly. He has reinforced preferential-race programs to strengthen economic gains of the Malay Muslims in the society where ethnic Chinese and Indian communities often lead in education and wealth.

Hundreds of Malay Muslims gathered outside the court, some carrying banners that read “Allah is owned by Islam,” and broke out in loud applause cheering the verdict.

The decision follows the Constitution and state laws that limit use of “Allah” to Muslims, said Ibrahim Ali, president of Malay rights group Perkasa. Still, “this is not a victory for the Muslims against the Christians (as the) Christians are also citizens of this country,” he added. “We would like to live happily with them and also with other races.”

He is among many Muslim activists who see Monday’s court decision as possibly easing tensions in the Muslim community toward the Catholic church, which have been on the rise.

“This will keep the peace and stability of our society,” said Iqbal Hakim Abdul Razak, program coordinator of the National Islamic Youth Association.