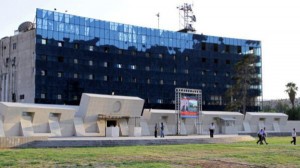 The TV station stopped broadcasting after the explosion which resulted in damages to the building , the report added

SANA also reported later that the body of ( possibly ) the suicide bomber was found near the scene of the explosions.