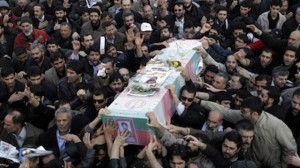 When a key Iranian scientist was gunned down last week, many observers figured Israeli spy agency Mossad had struck again. But new signs point to deadly intrigue within the rogue nation’s fractious leadership.

In the days since the body of Mojtaba Ahmadi, who worked on the Islamic Revolutionary Guard Corps’ secretive cyberwarfare unit, turned up in a wooded area north of Tehran, the mystery behind his death has only deepened. As with five previous hits on top scientists, witnesses reported black-clad gunmen seen speeding away on motorcycles. But this time, the regime did not immediately point the finger at Israel. In fact, it hasn’t pointed the finger anywhere – despite an exiled group’s claim of responsibility.

“In the wake of a horrific incident involving one of the IRGC officials… the matter is being investigated and the main reason of the event and the motive of the attacker has not been specified,” read a statement from Revolutionary Guards to the state-controlled Sepah News

The IRGC specifically ruled out an assassination, curious in light of witnesses who said Ahmadi was shot twice in the chest at close range in a nation where gun crime is virtually nonexistent. The murky circumstances, uncharacteristically deliberative approach of the IRGC and new President Hassan Rouhani’s recent overtures to the West have prompted speculation.

Since 2007, five Iranian nuclear scientists, as well as the nation’s ballistic missile program director, have been assassinated in attacks the regime routinely blamed on Israel. Typically, Israel has declined to comment on the assassinations, other than to convey off the record to reporters that it was not dismayed by such developments. But Yaakov Peri, former chief of Israel’s security agency, Shin Bet, and a current cabinet minister, told Israel Radio Ahmadi’s murder has the hallmarks of an “internal dispute.”

“The fact that a cyber commander or this or that scientist was wiped out or killed in this or that assassination does not necessarily mean that Israel’s hand is in the matter,” Peri said.

Other regime watchers have noted that Ahmadi’s team launched a cyber attack at the U.S. Navy that coincided with Rouhani’s trip to New York for the UN General Assembly, a move that some saw as aimed at undermining Rouhani, a self-styled moderate. Ahmadi’s death may have been Rouhani loyalists sending a message to hard-liners within the nation’s complex leadership matrix.

Ahmadi was found dead Oct. 2 in a wooded area near his home in the town of Karaj, northwest of Tehran. A witness told the regional media outlet Alborz that Ahmadi had two bullet wounds in his chest, and the local police chief told the outlet two motorcycles were seeing fleeing the scene. Days later, Soldiers of the Kingdom Assembly of Iran claimed responsibility, but an IRGC official dismissed the claims, saying the group, which seeks to restore a monarchy and has claimed responsibility for previous attacks “has nothing to do with assassination whatsoever, and this group intends to use this case in its favor.”

On Oct. 4, IRGC spokesman Ramazan Sharif told Iranian Student News Agency that while the death has “fueled suspicions from the very beginning…that it was an assassination…the investigation made clear it was not an assassination” and the police are continuing their investigation.

Sharif’s comments could be aimed at downplaying the political implications of the attack. The IRGC is believed to be hostile to Rouhani’s strategy to court the West in the face of crippling sanctions imposed over Iran’s nuclear weapons program, and Rouhani and Supreme Leader Ali Khomenei have warned the Guards against interfering with the approach.

The cyber attack on the U.S. Navy was one of the most serious breaches yet against an American government infrastructure. The Navy believes the attack showed an increased ability and sophistication on the part of Iran’s cyber capabilities, and officials told Defense Secretary Chuck Hagel the attack appeared to indicate a strengthening of ties and friendship between the Russians and Iranians.

Photo: Iranians mourn nuclear scientists killed last year in an apparent assassination. But Tehran is not saying the latest death of a top scientist was the work of Israel. (AP)