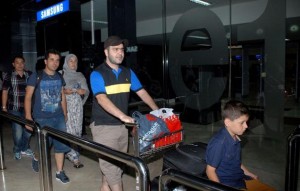 A plane carrying the Lebanese survivors of the asylum seeking boat that capsized off the Indonesian shores landed in Beirut on Sunday.

They returned to Lebanon after a Lebanese official delegation visited Indonesia and finished the necessary legal procedures for the eighteen Lebanese citizens to return home., National News Agency reported.

The delegation which arrived in Jakarta on Thursday was charged with identifying the bodies of the drowned victims, securing their transfer to Lebanon, and dealing with the diplomatic procedures necessary to allow the survivors to legally return to Beirut, according to An Nahar daily.

The Lebanese foreign ministry revealed on September 29 that 68 Lebanese were on board the ill-fated vessel and that 18 survived the ordeal while at least 28 were still missing.

The boat, which was estimated to be carrying up to 120 Middle Eastern illegal immigrants, capsized on September 27 off Indonesia’s main island of Java. It was headed for Australia’s Christmas Island.

Photo: Lebanese survivors of the asylum seeking boat that capsized off the Indonesian shores landed in Beirut on Sunday October 6, 2013 (NOW photo)