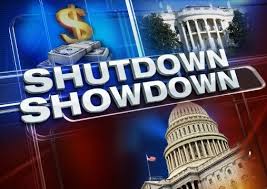 The U.S.federal government’s fiscal year officially ended at midnight on September 30. The House and Senate have not been able to reconcile their differences in time to pass a spending bill to fund the federal government into the new fiscal year. Also, the U.S. Treasury claims it will run out of wiggle room after mid-October and will need to have the debt ceiling raised. Are these things to worry about? It depends on who you are, but for investors, probably not.

First, the government shutdown, and why it may not be bad overall for the markets

Republicans in the House are insisting on modifications to the Affordable Care Act as part of a budget deal. Specifically, they are demanding that the individual mandate be postponed for a year and that members of Congress and their staff be subject to the same rules as the rest of Americans. Democrats in the Senate are refusing to tie any modifications to the Affordable Care Act to a budget deal. These apparently irreconcilable differences may be negotiable if Republicans in the House are willing to add a debt ceiling increase to their proposal. Whether this is a short-lived or long-lasting shutdown depends on the relative negotiating strength of the parties. At the moment, it is unclear which has the stronger or more popular position.

During a government shutdown, essential government functions are still performed. Of the 3.3 million federal employees, only about 800,000 have actually been told not to show up to work. Interestingly, they will likely get paid but only retroactively. Social Security checks will still go out. The military will still operate. A government shutdown doesn’t really shut down the government. It is, however, disruptive to the functioning of the government, and it does affect individuals in negative ways. Don’t worry about members of the Congress or the president—they still get paid.

Recent market movements may have had more to do with the possibility of the Italian coalition government dissolving than the troubles in Washington, thanks to Silvio Berlusconi demanding that his party withdraw from the coalition government. He is trying to keep his seat in the Italian Senate instead of serving jail time for the crimes he committed. Members of his party have since indicated that they will stay in the coalition rather than provoke a national crisis to keep Berlusconi out of trouble. (And you thought U.S. politics was bizarre!)

Second, the debt ceiling debate and why, no matter what, it won’t end in default

The debt ceiling is approaching, and the headlines are screaming, “Default!” That’s not just misleading, it’s patently wrong.

Hitting the debt ceiling or running out of wiggle room for the Treasury does not mean the government has an increased risk of defaulting on the U.S. debt. Default is a technical term. It refers to a debtor that misses a principal or interest payment. That will not happen. To claim it will is nothing but fear mongering. I wrote about this in 2011 during the last debt ceiling battle and again in January 2013.

It is possible that the U.S. government will have to skip previously authorized, but not appropriated, payments to service providers or on other programs. That, however, is not the same as a default. Only an actual default would be bad for the credit of the U.S. government. The rest might be bad policy, but it won’t have the same effect as a default on the debt. Political promises are not the same as debt.

The effects of a government shutdown or a debt ceiling battle depend on how long they last and what sorts of policies emerge from them. I don’t think a drawn-out battle will be in either political party’s interest in the upcoming midterm election. Thus, the shutdown will likely be short. If there is a battle of the debt ceiling, it won’t lead to a default by the federal government. It’s quite likely we’ll see a deal emerging over the next few days in which the government shutdown ends and the debt ceiling is raised.