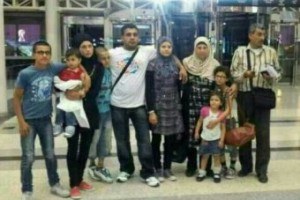 Relatives of the Lebanese asylum seekers who drowned after their Australia-bound boat capsized on its way from Indonesia blocked on Tuesday Akkar roads to protest against the inaction by Lebanese officials over revealing the fate of the Lebanese that are still missing.

The Akkar residents are blaming the government’s negligence on security, stability and living conditions for Friday’s boat tragedy off the Indonesian coast that left dozens dead from the impoverished Akkar region.

The death toll from the drowning of the boat rose to 39 on Monday, officials said, with more feared missing.

The boat, which was estimated to be carrying between 80 and 120 Middle Eastern illegal immigrants, sank on Friday in rough seas off Indonesia’s main island of Java. It was headed for Australia’s Christmas Island.

The Lebanese foreign ministry said Sunday there were 68 Lebanese, including children, on board the ill-fated vessel and that 18 survived the ordeal while at least 29 were still missing.

Rescuers have been unable to deploy boats to hunt in the rough seas, with waves at heights of four to six meters.

Survivors of the incident told journalists that they sent their GPS coordinates to Australian rescuers to assist them — but no one came to their aid.

“We sent them the position on the GPS, exactly where we are, and we drowned and nobody came.

“This is because of the Australian Government. I want them to know that.”

Mother and seven children among dead

Lebanese community leaders in Melbourne say a mother and her seven children are among those who drowned in the sinking.

Community leader Milad Bardan said about 40 Lebanese asylum seekers drowned or are missing, including Kawthar Taleb and her seven children.

Mr. Bardan said the 40 victims are all from the same area in Lebanon’s north, where people-smugglers are targeting locals looking to flee the violence spilling over the border from Syria.

“Unless Syria settles down, more will come, definitely,” he said.

He said more asylum seekers from northern Lebanon are already en route to Australia, having paid people-smugglers about $20,000 each, and that the community is worried that more could perish at sea.