Iraq’s Sectarian Violence May Lead to a Civil War 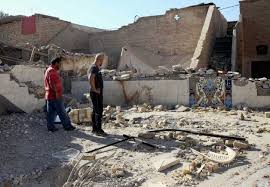 Early Monday morning, more than a dozen car bombs ripped through mostly Shiite neighborhoods in Baghdad, killing at least 50 people and leaving dozens lying bloodied in the streets. The worst attack that day was in heavily Shiite Sadr City, where a man parked a white car near an area where day laborers gather; a bomb inside erupted, killing seven people and wounding 16.

Such reports have become commonplace over the past few months, as violence in Iraq has escalated to levels unfathomable in almost any other country, and by any metric—death tolls, frequency, geographic distribution—it’s becoming worse. For decades, the Ba’ath Party of toppled dictator Saddam Hussein, composed mostly of secular Sunnis, ruled Iraq’s majority Shi’ite population and ruthlessly kept a lid on sectarian tensions. After the 2003 U.S.-led invasion overturned the Saddam regime, Shi’ites controlled the new government. This year, violence in Iraq has been largely the result of a Sunni bombing campaign aimed at the Shi’ite-dominated political status quo. The civil war in neighboring Syria—itself a volatile, sectarian conflict—has spilled across the border, and Sunni jihadist factions are operating in both countries. Now, four months before the next parliamentary elections, Iraq increasingly appears to be spiraling towards a civil war.

Since 2006, when Iraq then under U.S. occupation convulsed in sectarian bloodshed, violence has been driven mainly by internal divisions, and after the withdrawal of U.S. troops in 2011, the Shi‘ite-dominated government led by Prime Minister Nouri al-Maliki has been unable to stop the killing. “The struggle for power is not conducted along neat Shia versus Sunni or Islamist versus secular dividing lines,” a May report by British think tank Chatham House explained. “However, issues of identity, rights and interests have often found sectarian expression in periods of upheaval and transition.”

It’s spreading as well. Until this weekend, much of the violence has occurred in Baghdad and its environs, largely sparing Iraqi Kurdistan, an autonomous region in the north. For most of the past decade, Iraq’s Kurdish region has been immune to the bloodshed. When American troops occupied Iraq, no American soldiers were killed there. But this weekend, as the results of the region’s parliamentary elections were announced, suicide bombers in the Kurdish capital Erbil attacked a building housing the Kurdish security forces, setting off gunfights in the streets. According to the regional government, six attackers and six members of the security forces were killed.

Attacks then picked up in the spring and summer. According to the U.N. Assistance Mission for Iraq, more than 1,000 Iraqis were killed in July, the deadliest month in the country since sectarian violence peaked in 2006 and 2007. More than 800 were killed in August, and the U.N. estimates that nearly 1,000 were killed in September. Since the April protests began, more than 5,000 Iraqis have been killed in the violence.

“What we’ve been seeing over the course of 2013 is an ability to coordinate these waves of attacks so they’re happening over a larger geographic spread and they’re happening more often,” says Stephen Wicken, a Washington, D.C.-based security analyst who focuses on Iraq. “They never stopped entirely, and they certainly picked up right after U.S. troops withdrew. But now, the reset period between these massive waves of bombings is pretty small.”

The ongoing civil war in Syria, with which Iraq shares a 600 km (375 mile) border, has exacerbated the sectarian conflict. Wicken suggests Maliki’s coalition in parliament is using “the mantle of sectarianism” to guide short term security measures, ranging from publicly demanding protection for Shi’ites in Sunni areas to calling for a Shi’ite militia to defend Baghdad from al Qaeda. “It’s driving a lot of his decisions in a short term, knee jerk way,” Wicken says. “He’s making his decisions based on sectarianism and quelling violence.”

The problem became worse when al-Qaeda elements in Iraq and Syria merged in April to form the Islamic State of Iraq and the Levant, which is known by the acronym ISIS. The group is believed to be one of the main jihadist groups fighting forces loyal to Syrian President Bashar Assad, and they have claimed responsibility for several attacks in Syria. According to David Siegel, an associate professor of political science at Duke University who studies the evolution of terrorist organizations, such a merger is unusual. “Typically, groups don’t join together,” Spiegel says. Smaller groups have assumed the mantle of al-Qaeda to give themselves more credibility, but “mergers that are actually real mergers, are rare.” According to the BBC, two months after the ISIS merger was announced, al-Qaeda leader Ayman al-Zawahiri reportedly ordered the union negated.

Yet that hasn’t stopped ISIS from having a potentially enormous impact on violence in Iraq. Two weeks ago, reports emerged that the Iraqi government planned to form a “Special Division” in Baghdad composed of Shi’ite militias to fight al Qaeda, a charge the Maliki government has denied. Such a division would likely be composed of groups who played major roles in the 2006-2007 sectarian bloodbath, and rearming those militias could rekindle a fiery era where each morning brought the grisly sight of dead bodies along the edges of Sunni and Shi’ite neighborhoods.

The Maliki government insists that Iraqi Security Forces can secure the capital, but if waves of bombings persist, the specter of mobilized, vigilante Shi’a militias is a troubling possibility. “If it is true that Maliki starts looking to [Shi’a militias] for security, then we’re going from a Sunni terrorist campaign to a situation where two sides are going to be fighting each other,” Wicken says. “And in situations like this, it’s each side attacking the other side’s civilians. If we start to see a full on resurgence of Shia militias, that’s when we’re starting to talk more about civil war again.”

photo: People inspect the ruins of the al-Hussein Shiite mosque a day after a suicide bomber struck in Musayyib, about 40 miles (60 kilometers) south of Baghdad, Monday, Sept. 30, 2013. On Sunday, a series of bombings in different parts of Iraq, including two suicide bombings in the country’s relatively peaceful northern Kurdish region, killed scores. (AP Photo/Hadi Mizban)