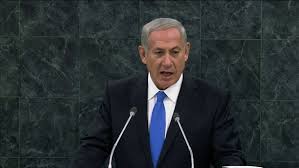 Israeli Prime Minister Benjamin Netanyahu on Tuesday dismissed a charm offensive by Iran’s new president as a ruse concocted by a “wolf in sheep’s clothing,” and declared that Israel was ready to stand alone to deny Tehran an atomic weapon.

In a combative address to the U.N. General Assembly, Netanyahu spoke harshly about Hassan Rouhani, Iran’s new, centrist president who has made diplomatic overtures to the United States and spoke by telephone last week with President Barack Obama.

“But when it comes to Iran’s nuclear weapons program, the only difference between them is this: Ahmadinejad was a wolf in wolf’s clothing, Rouhani is a wolf in sheep’s clothing, a wolf who thinks he can pull the wool over the eyes of the international community,” Netanyahu added.

Netanyahu’s address reflected Israeli worries that the emerging signs of what could become a U.S.-Iranian rapprochement might lead to a premature easing of international pressure designed to deny Tehran the means to make a bomb.

“Don’t let up the pressure,” Netanyahu said, adding that the only deal that could be made with Rouhani was one that “fully dismantles Iran’s nuclear weapons program.”

The United States, Israel and other countries accuse Iran of using its nuclear program to try to develop nuclear weapons. Iran says the program is for peaceful energy purposes only.

In a response to Netanyahu’s speech, Khodadad Seifi, a representative of the Iranian U.N. delegation, rejected the Israeli allegations and told the 193-nation General Assembly that Iran was “fully committed” to its nuclear non-proliferation obligations.

“All Iranian nuclear activities are and have always been exclusively for peaceful purposes,” he said. “Iran continues to fully cooperate with the IAEA (International Atomic Energy Agency).” He was referring to the Vienna-based U.N. nuclear watchdog.

Netanyahu said Iran’s nuclear program had continued at a “vast and feverish” pace since the election in June of Rouhani.

“Like everyone else, I wish we could believe Rouhani’s words, but we must focus on Iran’s action,” Netanyahu said, adding that sanctions should be tightened if the Iranians pursue nuclear projects while negotiating with world powers.

After meeting with Netanyahu on Monday, Obama reiterated his determination to prevent Iran from getting nuclear arms. Both leaders said their countries were cooperating on the issue.

On Tuesday, Netanyahu made clear that Israel, believed to have the Middle East’s only atomic arsenal, was prepared to resort to unilateral military action against Iran if it deems diplomacy a dead end.

The bulk of his speech was about Iran, but he also touched on the Israeli-Palestinian peace process, saying the Jewish state was prepared to make a “historic compromise,” but he faulted Palestinian leaders for not reciprocating enough.