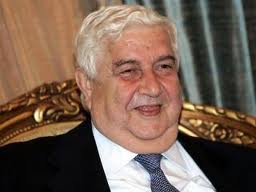 He spoke on the sidelines of the United Nations General Assembly, a day after the Security Council approved a resolution that obliges Syria’s government to comply with an international plan to destroy its chemical weapons arsenal. The resolution also endorsed the outcome of the Geneva conference between the government and the opposition in June 2012, which called for the establishment of a transitional government with full executive powers.

The Syrian opposition, which has been embroiled in a bloody conflict with Assad’s forces for two and a half years, has repeatedly said it will not take part in any transition government that includes the president.

The latest statement from al-Moallem could mean that efforts to organize a second meeting of the opposition and the government later this year in Geneva may fail.

“For the Syrian people, Bashar Assad is the elected president until mid-2014, when presidential elections will be held,” al-Moallem said. Other candidates are welcome to run under the country’s constitution, he added, stressing that only the Syrian people can choose their president, not outside governments or the opposition, which is based abroad.

Syria’s opposition accuses Assad’s government of carrying out a brutal campaign against Syrians that culminated in a nerve gas attack in suburbs of the capital, Damascus, on Aug. 21 that left hundreds dead.

The government denies its involvement in the attack, but it has since pledged to give up its stockpile of chemical weapons.

Al-Moallem also repeated his government’s belief that its army is fighting terrorist elements affiliated with al-Qaida.

“Those terrorist elements are supported by neighboring countries like Turkey and Jordan and some Arab states such as Saudi Arabia and Qatar,” al-Moallem said.

Iran has been a key supporter of Assad, and the opposition claims that elements of Iran’s Revolutionary Guard and the Tehran-supported Hezbollah are operating freely within Syria.

But al-Moallem said the warming of Iranian-U.S. relations over the past week is not a threat to his government. “We are happy about this rapprochement,” he said. “This will have a positive impact on the American view of the region.”