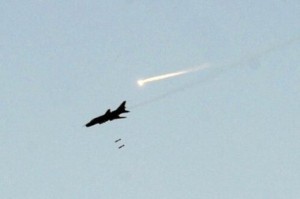 An activist group says government warplanes have bombed a high school in northern Syria, killing at least 12 people, most of them students.

The Britain-based Syrian Observatory for Human Rights says the regime airstrike took place Sunday in the city of Raqqa, which is the only Syrian provincial capital under rebel control.

The Observatory said the death toll is likely to rise because many of the wounded have serious injuries.

President Bashar Assad’s regime has relied heavily on its air force to strike rebel-held areas in the country’s 2 ½ year-old conflict.