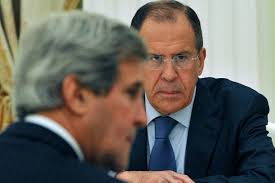 Russian Foreign Minister Sergei Lavrov on Sunday accused the United States of blackmailing Russia over a tough UN resolution against Syria, and said the West is blinded by the idea of regime change in the war-torn country.

“Our American partners are beginning to blackmail us: if Russia won’t support a resolution under Chapter VII in the UN Security Council, then we will stop the work in the Organisation for Prohibition of Chemical Weapons,” Lavrov said in a Channel One interview, according to Russian agencies.

He said the OPCW is “about to make a decision” on Syria but the process is threatened by the “arrogant position of some Western partners”.

“They need Chapter VII, which presumes applying pressure on violators of international law, including sanctions and the possibility of using force,” he said.

Lavrov added that Russia would be willing to send troops to Syria as part of an international presence to secure the work of experts on chemical weapons sites.

“We are ready to allocate our servicemen, military police, to participate in such efforts,” he said, though adding that he doesn’t “think that large contingents are necessary… military observers would be enough.”

Washington, Paris and London want a strongly worded resolution to ensure compliance, possibly under the UN Charter’s Chapter VII — a move Lavrov said contradicts the landmark agreement on Syria’s chemical disarmament he reached with US Secretary of State John Kerry in Geneva on September 14.

“Our partners are now blinded by their ideological goal of regime change (in Syria)” Lavrov added. “All they talk about is that Bashar al-Assad must leave.”

“They are only interested in proving their own superiority. Not in the goal that is guiding us, to solve the problem of chemical weapons in Syria,” Lavrov said.

Lavrov on Sunday also contested Assad’s claim that the disarmament programme requires $1 billion (740 million euros). “In Geneva we discussed the possible cost of this programme. The figures were much less substantial,” he said.