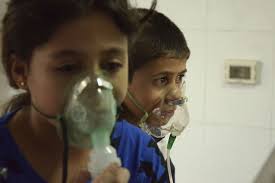 Beirut, Lebanon – A month after rockets carrying chemical payloads rained down on the suburbs of Damascus, doctors say hundreds are still suffering the ill effects of sarin poisoning. But the horror of the gas attack is being overtaken by continuing shelling and airstrikes, as well as by malnutrition and disease.

In more than a dozen Skype interviews, field-hospital doctors and activists in the area known as Ghouta described what they called a dire humanitarian situation, with residents struggling to survive under a continuing siege from government troops.

Most victims of sarin attacks die within the first 24 hours, according to experts; the United States and its allies have said 1,429 Syrian civilians died in the Aug. 21 attack, which they blame on the Syrian government. A number of other sarin-related deaths have followed, doctors say, mostly in the days immediately after the attack.

But scores of survivors suffering from side effects continue to require medical attention for persistent symptoms that include respiratory problems, nausea, weakness and blurred vision, the doctors say. Meanwhile, they say, explosive shells continue to fall, leaving little way of evacuating the wounded and only limited medical equipment to treat them.

An estimated 300 survivors of the chemical attack are contending with side effects in the Eastern Ghouta towns of Ein Tarma and Zamalka, doctors said. An additional 150 are suffering from the effects in Moadamiya, a town to the west of Damascus that was also targeted Aug. 21, doctors said, and oxygen supplies there are low.

But even before last month’s attack, the worst chemical strike in decades, rebel-held areas of the Damascus suburbs had long been a target of government assaults. And now, the side effects from sarin are just one among a sea of concerns.

“This siege is what we call a slow death,’’ said an activist who gave his name as Anas al-
Dimashqi. For about 10 months, he said, government ­forces have maintained what amounts to a blockade by erecting checkpoints that prohibit food and supplies from entering the area.

The activist, who is based in the Eastern Ghouta town of Kafr Batna and volunteers in field hospitals, was using a pseudonym adopted to protect against retaliation by government ­forces.

With hospitals lacking even the most basic medical supplies, neighborhoods have become breeding grounds for communicable diseases, doctors and activists said. With food supplies scarce and proteins and fresh vegetables lacking, malnutrition, particularly among children, is increasingly common.

Majed Abu Ali, a spokesman for the medical office in Eastern Ghouta, said there have been outbreaks of diseases such as brucellosis, scarlet fever and hepatitis. Child malnutrition is increasingly common, said the doctor, adding that about 100 children are treated for malnutrition and dehydration each month in the area’s clinics, which are sorely lacking supplies.

With communicable diseases and infections rife, a visit to a field clinic can in itself be risky.

A 52-year-old resident of the town of Irbin who uses the pseudonym Um Samer said she contracted a staph infection while receiving treatment for sarin poisoning at a field hospital on the outskirts of the village.

“Everyone uses the same toilet and drinks from the same cups; there is blood and urine on the ground,” she said from inside a textile-factory-turned-hospital. “We came to be saved from chemical poisoning, and now we may die from pneumonia or infections.”

A field doctor in Moadamiya who for security reasons asked to be identified only by his first name, Majid, said that flour supplies had run out six months ago.

He provided photographs of two children who he said had died of starvation in recent weeks. Human Rights Watch, which examined the ­images, said that they appeared consistent with death from malnutrition but that its investigations were unable to confirm the cause of death.

“Those that used to eat three meals a day now eat one,” Majid said.

Aid organizations and the United Nations have unsuccessfully called on President Bashar al-Assad and the rebels to ensure humanitarian access to the areas. Syria has recently agreed to a plan by Russia and the United States that calls for the country to surrender its chemical weapons, but the doctors and activists said residents wait in fear of another attack.

In Eastern Ghouta, the doctors said they were trying to stock 14 emergency chemical-weapons treatment centers so that residents can be prepared if the horror of Aug. 21 is repeated.

“We do not trust this regime,” Dimashqi said.