Russia has no plans for Syrian chemical weapons destruction 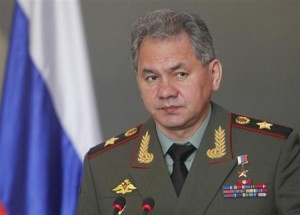 Russia has no current plans to destroy Syrian chemical weapons on its own territory under a Russia-U.S. deal to eliminate President Bashar al-Assad’s stockpiles, Russian Defence Minister Sergei Shoigu said on Thursday.
Asked whether Russia had such plans, Shoigu told Interfax news agency, “No.
A decision needs to be taken for this.”

“We have factories for the destruction of chemical weapons, but there is a big difference between ‘ready’ and ‘willing’.”

Russia has been destroying its own Soviet-era chemical weapons through the Nunn-Lugar agreement and has seven facilities for the destruction of chemical weapons, according to information on the Munitions Agency website.

Russia and the United States brokered a deal last week to put Assad’s chemical arms stockpiles under international control to avoid possible U.S. military strikes that Washington said were intended to punish him for an August 21 poison gas attack.

Logistics have been murky around the deal, under which Assad would account for his chemical weapons within a week and see them destroyed by mid-next year.

Russia and the United States are the only countries with industrial scale capacity to handle mustard, VX, sarin or cyanide-armed munitions, but the import of chemical weapons is banned under U.S. law.

Assad has denied his forces were responsible for the attack.