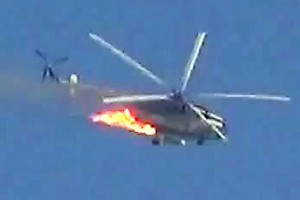 Turkey warned Damascus Sept.18 it would “face the consequences” if it sought to avenge the downing of a Syrian military chopper this week, but said it did not believe a border attack was a retaliatory strike.

A car bomb exploded at Syria’s rebel-held Bab al-Hawa border crossing into Turkey on Tuesday, wounding at least 12 people, according to a monitoring group, a day after Turkish warplanes shot down a Syrian helicopter which Ankara claimed violated its airspace. Turkish Foreign Minister Ahmet Davutoğlu said Tuesday’s bombing did not appear to be a revenge attack.

“Our security and intelligence units have been working on this but one should not reach an early conclusion that it was a retaliation,” Davutoğlu told a press conference in Ankara.

“Such a retaliation against us within the Syrian territory cannot be considered,” he said, warning: “The Syrian regime should know that it will face the consequences even if it thinks of a retaliation.” Relations have deteriorated between once close allies Damascus and Ankara since the outbreak of the deadly conflict in Syria in March 2011.

Turkey has lobbied for the ouster of President Bashar al-Assad and provided shelter for Syrian rebels seeking to overthrow him.

The long and volatile border between the two countries has become increasingly tense, with a number of incidents in the area, which prompted NATO to station Patriot missile batteries there for defensive purposes.