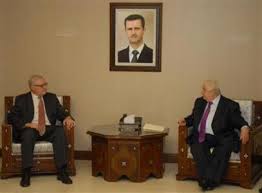 Russia denounced U.N. investigators’ findings on a poison gas attack in Syria as preconceived and tainted by politics on Wednesday, stepping up its criticism of a report Western nations said proved President Bashar al-Assad’s forces were responsible.

Russia, which has veto power in the Security Council, could cite such doubts about proof of culpability in opposing future efforts by the United States, Britain and France to punish Syria for any violations of a deal to abandon chemical weapons.

“We are disappointed, to put it mildly, about the approach taken by the U.N. secretariat and the U.N. inspectors, who prepared the report selectively and incompletely,” deputy Foreign Minister Sergei Ryabkov told the state-run Russian news agency RIA in Damascus.

“Without receiving a full picture of what is happening here, it is impossible to call the nature of the conclusions reached by the U.N. experts … anything but politicised, preconceived and one-sided,” Ryabkov said after talks with Syrian Foreign Minister Walid al-Moualem.

The report issued on Monday confirmed the nerve agent sarin was used in the August 21 attack but did not assign blame. Britain, France and the United States said it confirmed Syria’s government, not rebels as Russia has suggested, was behind it.

Russian Foreign Minister Sergei Lavrov said on Tuesday the investigation was incomplete without examination of evidence from other sources and that suspicions of chemical use after August 21 should also be investigated.

Ryabkov said Syrian authorities had given him alleged evidence of chemical weapons use by Assad’s opponents.

The stark disagreement over blame for the attack may complicate discussions among Security Council members – Russia, China, the United states, Britain and France – over a Western-drafted resolution to eliminate Syria’s chemical weapons.

Russia has been Assad’s most powerful backer during the conflict that has killed more than 100,000 people since 2011, delivering weapons and – with China – blocking Western efforts to use the Security Council’s clout to pressure his government.

Moscow argues that the danger emanates from rebels, many of whom harbour militant islamist ambitions for Syria that could ultimately pose a threat both to Russia and the West.

The draft resolution is intended to support a U.S.-Russian deal reached on Saturday calling for Syria to account for its chemical weapons within a week and for their destruction by mid-2014. The deal was based on a Russian proposal accepted by Assad.

The deal halted efforts by U.S. President Barack Obama to win Congressional approval for military action to punish Assad for a poison gas attack, which the United States says killed more than 1,400 people in rebel-held areas.

U.S. Secretary of State John Kerry called on Tuesday for a resolution with the strength to force compliance from Assad.

Diplomats said the current U.S.-British-French draft was written so that its provisions are under Chapter 7 of the U.N. charter, which covers Security Council authority to enforce its decisions with measures such as sanctions or force.

But Russia has made clear it believes authorisation of the use of force would require a second resolution to be introduced if the Syrian government or its opponents are found to have violated the country’s commitments on chemical weapons.