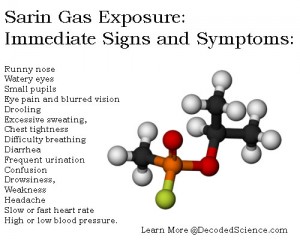 A U.N. photograph of chief U.N. chemical weapons investigator Ake Sellstrom handing over his report on an August 21 gas attack on Damascus suburbs shows that the report confirms use of the deadly nerve agent sarin.

“On the basis of the evidence obtained during the investigation of the Ghouta incident, the conclusion is that chemical weapons have been used in the ongoing conflict between the parties in the Syrian Arab Republic … against civilians, including children, on a relatively large scale,” the report said.

“In particular the environmental, chemical and medical samples we have collected provide clear and convincing evidence that surface to surface rockets containing the nerve agent sarin were used,” it said.

The photo released by the United Nations shows Sellstrom giving the report, which will be officially released later on Monday, to U.N. Secretary-General Ban Ki-moon.

A reporter for U.N. Tribune website zoomed in on the photo revealing its contents. Reuters downloaded a high-resolution version of the photo and confirmed what the text contained.

The results of Sellstrom’s investigation are not surprising. Several weeks ago U.S. Secretary of State John Kerry announced that sarin had been used in the chemical attack on the Ghouta region near Damascus. The United States said 1,400 people were killed, including more than 400 children.

Ban said on Friday that Sellstrom’s report would be an “overwhelming” confirmation of the use of chemical weapons. He also said that Assad “has committed many crimes against humanity,” though he did not say whether it was Assad’s forces or rebels who were behind the August 21 attack. He added that Assad would be held to account for his crimes.

Ban was due to brief the U.N. Security Council on Sellstrom’s report on Monday.

The U.N. confirmation of the use of sarin gas on August 21 comes as France, Britain and the United States agreed at three-way Paris talks on Monday to seek a “strong and robust” U.N. resolution that sets precise and binding deadlines on removal of chemical weapons.

The statement from French President Francois Hollande’s office followed talks involving the foreign ministers of the three countries and Hollande in the French capital, two days after Russiaand the United States struck a deal on chemical weapons that could avert U.S. military action.

It is not clear whether the full report will include details that suggest culpability. Sellstrom’s mandate is limited to investigating the facts, not assigning blame.

Some Western diplomats have said on condition of anonymity that information about the type of weapons and other details Sellstrom might possess could hint at government responsibility for the attack.

Syria and Russia have blamed the August 21 attack on the rebels. The rebels, the United States and other Western powers blame forces loyal to Syrian President Bashar al-Assad for the Ghouta attack.