US, Russia agree on seizure of Syria chemical weapons 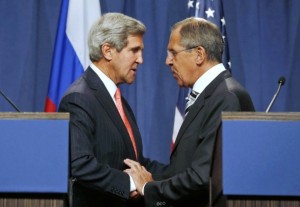 The United States and Russia agreed Saturday on an outline for the identification and seizure of Syrian chemical weapons and said Syria must turn over an accounting of its arsenal within a week.

The agreement will be backed by a U.N. Security Council resolution that could allow for sanctions or other consequences if Syria fails to comply, Secretary of State John F. Kerry said.

Kerry said that the first international inspection of Syrian chemical weapons will take place by November, with destruction to begin next year.

“Providing this effort is fully implemented, it can end the threat that these weapons pose not only to the Syrian people but to their neighbors, to the region,” and the rest of the world, he said.

Lavrov stressed that the documents released Saturday constitute an “agreed proposal” that does not yet have the force of law.

Senior administration officials had said Friday that the Obama administration would not press for U.N. authorization to use force against Syria if it reneges on any agreement to give up its chemical weapons.

One fear throughout the more than two-year civil war has been that the weapons would fall under the control of militant groups or that Syrian President Bashar al-Assad, if desperate enough, could sell them to the highest bidder.

“What about the murderer Bashar who gave the order? Should we forget him?” he said, speaking at a televised press conference in Istanbul. “We feel let down by the international community. We don’t have any hope.”

Idriss said that the United States and other international allies of the Syrian opposition are backing the Russian deal despite knowing that it is a ploy to protect the Syrian government. Russia and Syria are “playing games” to buy more time, he said, adding that with the focus now on chemical weapons, the Syrians killed by other weapons such as Scud missiles have been forgotten.

He implored the international community to give further assistance.

“Don’t leave the Syrians alone, facing and resisting this criminal regime,” he said. “We feel let down by the international community. We don’t have any hope.” 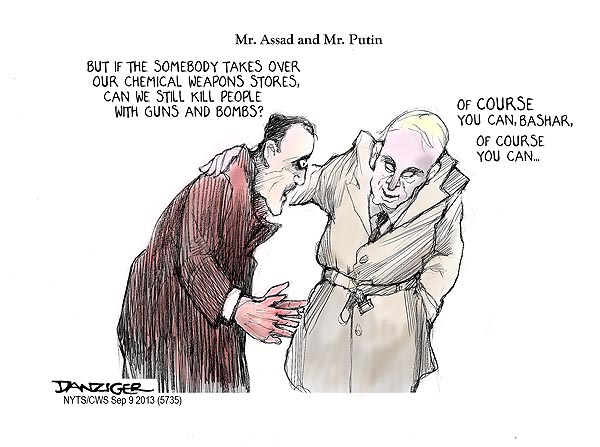 U.S. officials traveling with Kerry said the United States believes the Syrian government’s approximately 1,000 metric tons of chemical weapons material is housed among at least 45 sites, about half of which now contain material that could be used as weapons. U.S. intelligence has tracked movement of some of the material during the war, the officials said.

The stockpile contains both blister agents such as mustard gas and nerve agents such as sarin, the gas believed responsible for the Aug. 21 attack, one official said.

The officials spoke on condition of anonymity to discuss some previously classified assessments and to describe the closed-door negotiations in Geneva.

Destruction would take place within Syria and probably also in one or more other countries, another official said.

U.S. officials acknowledged that the proposed schedule calls for destruction much faster than has taken place in other countries that have voluntarily given up weapons of mass destruction, such as Libya. The rapid pace is largely in recognition of the ongoing civil war and the need to rid the battlefield of such weapons, the officials said.

But it was also clear that in the U.S. view the tight schedule, which one official called “daunting,” is partly designed to hold Russia responsible for progress.

It was further clear that the two sponsoring nations disagreed about how the United Nations could enforce the pact. Details were intentionally left vague, but Russia has not shifted from its long-standing opposition to any U.N. mandate for international military force inside Syria.

That means that punishing Syria for failing to comply with the agreement would probably take the form of U.N. sanctions or other nonmilitary means.

“Of course in this approach that we agreed on there is nothing said about the use of force, and not about any automatic sanctions,” Lavrov said through an interpreter.

Kerry went out of his way Saturday to praise Lavrov and to thank Russian President Vladimir Putin for pressing ahead with an enforceable agreement despite those differences.

“His willingness to embrace ideas for how to accomplish this goal, and his willingness to send Foreign Minister Lavrov here to pursue this effort, was essential for getting to this point,” Kerry said of Putin.

The United States is not taking its separate threat to use military force off the table, Kerry said, but the agreement appeared to make any such action extremely unlikely now.

The Russians had insisted in earlier talks between Lavrov and Kerry that the negotiations could not proceed under the threat of a U.N. resolution authorizing a military strike. Russia also wanted assurances that a resolution would not refer Assad to the International Criminal Court for possible war-crimes prosecution.

President Obama had said that the unilateral U.S. use of force against Syria for a chemical attack last month remains on the table. But consideration of that action, already under challenge by a skeptical Congress, was put on hold pending the outcome of these Geneva talks.

The discussions in Geneva began this week following a Russian proposal Monday, quickly agreed to by Assad, to place Syria’s chemical arsenal under international control and eventually destroy it.

The question of U.N. authorization for using force in Syria came up less than 24 hours after the Russians first made their proposal. France quickly drafted a resolution that threatened to consider “further necessary measures” — code words for military force — if Syria makes a deal and then breaks it. The draft, negotiated with the United States and Britain, was met with public statements from Lavrov and Putin that they would not negotiate under threat.

Washington and London have now backed off the use-of-force provision, and a revised French draft being circulated at the U.N. Security Council has weakened it. Instead, the draft calls for continuous review of “Syria’s compliance . . . and, if Syria does not comply fully, to impose further measures” that are unspecified.

The draft still includes a provision to refer Syrian authorities to the International Criminal Court, but that provision could also be removed in subsequent reworkings as the Geneva negotiations continue. The senior officials said they expected a U.N. resolution in some form to pass within weeks of a Geneva agreement.

One possible course of action, they said, is the internationally verified transfer of Syria’s chemical stockpiles to Russia, where they eventually would be destroyed.

Assad sent a letter Thursday to U.N. Secretary General Ban Ki-moon saying that on Monday he will sign the international accord banning chemical weapons.

Syria, which is not a party to the Geneva talks, denied until this week that it had chemical weapons. Under Russian pressure, Assad agreed to acknowledge the stockpiles and join the international weapons ban. Both Syria and Russia have said that the Aug. 21 attack, in the eastern suburbs of Damascus, was carried out by rebels, not the government.

The site of the attack was visited last month by U.N. investigators who are due to brief Ban on their findings Sunday. Ban told a gathering of women’s groups Friday that the inspectors have obtained “overwhelming” evidence that the attack took place, according to a U.N.-based diplomat.

“I believe that the report will be an overwhelming report that chemical weapons were used, even though I cannot say it publicly at this time,” Ban said in comments he apparently thought were confidential but that were captured on an internal television feed.

Ban did not say who was responsible for using chemical weapons or what nerve agent was used.

But the diplomat, who spoke on the condition of anonymity to discuss the unreleased results, said that “the report will clearly say it is sarin” gas and that “it clearly hints that the regime is the perpetrator.”

Ban is scheduled to present the findings to the Security Council on Monday.