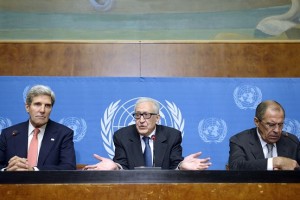 The reversals on Friday—after a week that began with President Barack Obama insisting that Congress urgently approve military action—came as U.S. officials said talks with Russia were producing a road map for shutting down Syria’s weapons program.

Mr. Obama and his team have turned to the Russian diplomatic proposal as a way to degrade Syrian President Bashar al-Assad’s ability to carry out chemical attacks without resorting to military strikes, which had drawn opposition at home and abroad.

Secretary of State John Kerry and his Russian counterpart Sergei Lavrov extended talks to continue for a third day in Geneva on Saturday, to settle on a more formal framework for disarming Syria and on benchmarks to gauge success.

Talks began unsteadily on Thursday, U.S. officials said. But diplomats traveling with Mr. Kerry said that a convergence between Washington and Moscow about the extent of the Syrian chemical program had raised hopes that Russia could push forward with a deal.

U.S. and Russian negotiators and technical experts moved closer Friday to agreeing on the scale of Syria’s chemical weapons stockpile and on ways to secure them, according to senior U.S. officials.

U.S. officials saw Russia’s recognition of the size of Syria’s chemical-weapon stockpile as a concession by Moscow. The U.S. came to Geneva concerned that the Russians would underplay the extent of Mr. Assad’s stockpile and, thus, undercut the prospects for dismantling it.

The long-stagnant efforts would bring together Mr. Assad’s regime and its opponents in Geneva, in a bid to create a transitional government in Damascus.

Mr. Obama addressed the Syrian crisis Friday, saying during a White House meeting that he hoped the arms talks “bear fruit.” He said any agreement with Russia and Syria must be verifiable and enforceable.

However, if the U.S. and its allies drop a requirement that any international agreement be binding through force, the process of enforcement and verification could become more difficult.

An explicit threat of force for Syria’s noncompliance was initially proposed by U.S. ally France earlier in the week, but rejected by Russia, which has veto power as a permanent member of the U.N. Security Council.

The senior administration officials said the threat of international force could be supplanted by the use of a verifiable process under which the Syrians would transfer control of their chemical weapons.

Administration officials wouldn’t say whether they want to carry out the process of Syrian disarmament under a so-called Chapter 7 U.N. resolution, which permits the use of force. No resolution on Syria has been offered yet at the Security Council.

Sen. John McCain (R., Ariz), a leading proponent of congressional authorization for force, portrayed a Chapter 7 resolution as a litmus test for Moscow—while allowing some time for the diplomacy to play out.

“Any agreement should come in the form of a U.N. Security Council resolution under Chapter 7 authority, which is the only way to threaten the use of force if Syria violates its commitments. If Russia does not agree, this is not a serious exercise, and we should walk away,” he said. “We can know this in a week.”

Mr. Kerry had inadvertently suggested the diplomatic track on Monday, when he said in response to a reporter’s question that Syria could avoid a military strike by surrendering its chemical weapons within a week.

Administration officials are now signaling they are willing to wait considerably longer, given that the process will entail talks with Russia, Syria’s accession to international conventions and a U.N. Security Council resolution.

Officials suggested a U.N. resolution could be passed within the next few weeks, while the process taking control of the chemical weapons would evolve over several months.

The U.S. use of force is still on the table, with the possibility of Congress authorizing military strikes or Mr. Obama, possibly with U.S. allies, taking action, the senior administration officials said.

Officials said they expect a U.N. report due Monday to show the Assad regime used chemical weapons on Aug. 21, which the administration believes will strengthen its hand with U.S. lawmakers and allies overseas.

U.S. officials in Geneva said they made it clear to the Russians that military strikes against Mr. Assad’s chemical weapons infrastructure remained a possibility.

“Our position on military force hasn’t changed. And we made that clear,” said a senior administration official traveling with Mr. Kerry.

U.S. officials said such strikes would be under the auspices of an international coalition, not the U.N.

As the resolution was encountering strong opposition, the Russian proposal emerged. Mr. Obama, in a televised address Tuesday asked lawmakers to halt action and ordered Mr. Kerry to pursue the diplomatic option.

Mr. Kerry was scheduled to leave Geneva after Saturday’s meetings and fly to Israel and then Paris, to meet with French officials on the issue of Syria.

“Verifying, accounting for, securing and destroying a large stockpile of chemical weapons takes time. It’s very difficult to do, particularly in an active war zone.”

She added: “So if we see progress, if we see forward momentum…we’ll keep moving forward.”

U.S. officials said they didn’t want to allow the process to drag out. “This can’t be a stalling tactic,” Ms. Harf said.

The disarmament talks in Geneva led to a return to long-stalled discussions for a broader peace effort. Messrs. Kerry and Lavrov agreed in the Spring to hold meetings in Geneva to bring the regime and its opponents to talks on a government transition.

The diplomats said Friday that a meeting between Russian and U.S. officials on the transition talks will take place late this month, when world leaders gather in New York for the United Nations General Assembly meeting.

Mr. Kerry said the U.S., U.N. and Russia would seek to hold meetings in New York later this month to identify potential participants in a Geneva conference. Preparations for the conference have been going on for more than five months, but both sides in the Syrian conflict have raised objections.

“We are working hard to find the common ground to be able to make [the conference] happen, and we discussed some of the homework we both need to do,” Mr. Kerry said after meeting with Messrs. Lavrov and Brahimi in Geneva Friday.

“It is very unfortunate that for a long period the Geneva communiqué was basically abandoned and we were not able to have endorsement of this very important document in the Security Council, as is as adopted,” Mr. Lavrov said Friday.

Part of the delay is due to the difficulty of bringing the Syrian government and a splintered opposition to the table. Mr. Kerry spoke Thursday with the Syrian Opposition Coalition president and the head of the rebels’ Supreme Military Council.