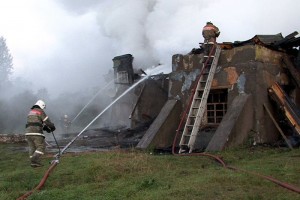 Thirty-seven people have been killed after a fire swept through the wooden Oksochi psychiatric hospital in north-west Russia.

A regional official has confirmed the deaths after earlier on Friday telling reporters the people were missing.

“During a fire in the Oksochi psychiatric hospital 37 people died,” regional investigators said in a statement.

“A 46-year-old nurse who was saving people perished in the fire.”

Officials said the fire was started by a patient.

“According to preliminary information, one of the patients set fire to himself and his bed,” said the investigative committee.

Novgorod region governor Sergei Mitin said at the scene that 23 people had been rescued from the institution, which is located in the village of Luka, 220 kilometres south-east of Saint Petersburg.

Ilya Denisov, a representative of the emergencies ministry, did not rule out that more survivors could be found.

He said firefighters were quick to react but that by the time they arrived the fire had consumed the entire building.

Emergency situations ministry official Oleg Voronov earlier told Russian radio that some of those missing may have escaped from the hospital into the Novgorod region and survived the blaze.

Mr Voronov said there were approximately 60 people in the building, most of them patients, when the fire broke out in the building that houses male patients.

The fire reduced the aged wooden building to smouldering wreckage.

A criminal probe has been opened into suspected negligence.

Officials said concerns had already been aired about the state of the building, and Russian state television said the authorities had been planning to close down the hospital.

The head of oversight at the emergencies ministry, Yuri Deshovykh, said the building was made of wood.

“This building had a weak resistance to fire,” he said.

“The administration had been told by the legal authorities to remedy numerous violations in fire security by August 1.

“But this was not done.”

‘Patients pushed out the windows’: Witness

Lidiya Vasilyeva, 40, lives near the hospital and said the fire broke out around 2:00am.

“Many patients were pushed out of the windows, many did not want to come out or did not come out immediately, it was very scary.

“In the summer they brought a patient here who they say was suffering from pyromania.”

The Kremlin’s human rights envoy, Vladimir Lukin, sounded the alarm over the state of psychiatric hospitals in the country.

“The entire society, people should protect citizens who have found themselves in a unique, difficult situation when they cannot protect themselves,” he said on Moscow Echo radio.

It is the second deadly fire at a psychiatric hospital in Russia this year, with a fire in April killing 38 people at a facility outside of Moscow.

The blaze in April prompted criticism over the state’s handling of mentally ill patients.

In 2006, a fire in a Moscow drug rehabilitation clinic killed 45 women, many of whom were trapped by metal bars on the windows that staff could not open.

The many fires at state-run institutions in Russia over the past decade has raised questions about the safety and living conditions of residents in these establishments and how they might escape in the event of an emergency.