Obama: US must be prepared to strike Assad 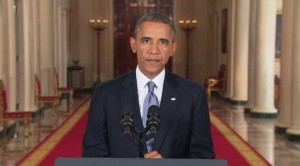 President Obama said Tuesday he would seize one last diplomatic opening to avoid military strikes on Syria but made a forceful case for why the United States must retaliate for its alleged use of chemical weapons if the effort fails.

In a nationally-televised address from the White House, Obama cautiously welcomed a Russian proposal that the government of Syrian President Bashar al-Assad give up its entire stockpile of chemical weapons, signaling that he would drop his call for a military assault on the regime if Assad complies.

But with little guarantee that diplomacy would prevail, Obama argued that the nation must be prepared to strike Assad. Facing a skeptical public and Congress, the war-weary president said the United States still carries the burden of using its military power to punish regimes that would flout long-held conventions banning the use of biological, chemical and nuclear weapons.

But the president added that he has “a deeply held preference for peaceful solutions” as he pledged to work with international partners to negotiate with Russia over a United Nations resolution on a Syria solution.

The speech was a plea from a president who, defying public opinion, has pushed the nation toward using American force in Syria — and staked his and his nation’s credibility on whether he can get Congress to support him. But it also capped two days of intense political and diplomatic negotiations on Capitol Hill and abroad that appear to have shifted his calculus for how quickly to move forward in Syria.

The president had visited Congress in the afternoon, asking senators in both parties to delay a vote on a resolution that would allow him to order strikes on Syrian government targets in retaliation for the alleged chemical attack that reportedly killed more than 1,400 Syrians near Damascus.

A White House official said Obama spent an hour apiece with both the Democrat and Republican caucuses, reviewing evidence of the chemical attack and reiterating his decision to pursue a “limited, targeted” military strike that would not involved U.S. troops on the ground inside Syria.

But Obama also told lawmakers that he would “spend the days ahead pursuing this diplomatic option with the Russians and our allies at the United Nations,” said the official, who spoke on condition of anonymity to discuss private deliberations.

The White House announced that Obama spoke with French President Francois Holland and British Prime Minister David Cameron and that the three countries agreed to “explore seriously the viability of the Russian proposal.”

The Russian offer could serve as a potential escape hatch for a president who has at times appeared reluctant to pursue military force, even after saying he believed it was the right course to reinforce a “red-line” against chemical weapons. Obama has struggled to build an international coalition for such action.

And with congressional and public support for U.S. strikes dwindling rapidly over the past week, Obama’s request to delay the Senate vote also served to buy him time to convince the public that the White House is pursuing a viable and coherent strategy despite a muddled message since the alleged Syrian attacks.

“Bottom line is we’re all going to try to work together,” said Sen. Charles E. Schumer (D-N.Y.) after attending the lunch with Obama. “There is hope, but not yet trust in what the Russians are doing. But I think there’s a general view, whether people are for it or against it, there’s an overwhelming view that it would be preferable if international law and the family of nations could strip Syria of the chemical weapons. And there’s a large view we should let that process play out for a little while.”
Sen. Bob Corker (R-Tenn.), a key GOP proponent of military strikes, emphasized that the option of U.S. force remained viable, but he added that “it’s probably good for us just to take a pause.”

At the same time, administration officials made clear that they would not accept the Russian offer at face value or engage in protracted negotiations that indefinitely delay its response to Assad. Russia has consistently blocked U.N. action against Syria, its geopolitical ally, frustrating the Obama administration and leading the president to announce that he would pursue military strikes independent of that international body.

Kerry told a House committee that the proposal “is the ideal way” to take chemical weapons away from Assad’s forces. But he warned that the United States would not tolerate “delay” or “avoidance,” adding: “We’re waiting for that proposal, but we’re not waiting for long.”

Russian President Vladi­mir Putin countered that the disarmament plan could succeed only if the United States and its allies renounced the use of force against Syria.

Kerry will travel to Europe this week to discuss the proposal with Russian Foreign Minister Sergei Lavrov, a senior administration official said later Tuesday. The meeting will be held Thursday in Geneva, where the United States and Russia hope to convene a separate peace conference on Syria, the official said.

“We need a full resolution from the Security Council,” Kerry said Tuesday during an online forum hosted by Google. “There have to be consequences if games are played.”

Underscoring the high stakes of his address, Obama has delivered just nine White House speeches in prime time, according to CBS Radio correspondent Mark Knoller, who keeps tallies on presidential appearances. The president chose the grand East Room over the more intimate Oval Office, the traditional location for commanders-in-chief to talk to the country about war.

Experts said it made sense for Obama to delay the congressional vote because his hand would be strengthened even if the Russia proposal fails.

“It gets him out of his disastrous political mess,” said Rosa Brooks, a former Pentagon official. Obama will be able to say he made every effort to avoid a military conflict, making it “a lot easier for him to make the case for force.”

But other analysts were more circumspect, fearing that stalling from Russia and Syria could give Assad time to hide his stockpile.

“The most dangerous downside,” said Jon Alterman, a former State Department official now at the Center for Strategic & International Studies, “is you get absorbed in endless processes which take you back to the status quo ante and you neither removed the weapons and you lost the momentum when there was support for action.”