W.H. warns: Iran could get a nuclear bomb if U.S. does nothing on Syria 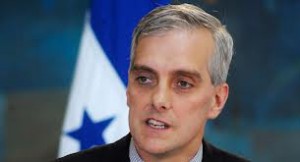 White House Chief of Staff Denis McDonough took to the television airwaves, warning all five networks that Iran could get a nuclear bomb if the U.S. does nothing on Syria. “We have to make sure that [the Iranians] do not misinterpret how we react to Syria, to suggest that they have greater operating space or more wiggle room as it relates to its nuclear program,” McDonough told CNN’s Candy Crowley.

As the Administration begins to make the case to Congress to authorize limited action in Syria in response to Syrian strongman Bashar Assad’s use of chemical weapons against his own people last month, they are making the case that the credibility of America is on the line. If other nations see that Syria can cross red lines with impunity, they too shall cross red lines and then there will be chaos, the argument goes. And they aren’t the only ones making this case. The American Israeli public Affairs Committee, the powerful American-Israeli lobby, will be saying much the same thing to lawmakers as they return from their summer recess: this isn’t about Syria as much as it is about protecting Israeli from a nuclear holocaust.

In recent months, however, the political situation in Iran has become far more complicated, and nuanced, than the current debate in the U.S. has acknowledged, with an emerging domestic debate about how the country should respond to both the U.S. and the use of chemical weapons. Much like Washington, Tehran finds itself debating what to do with Syria.

Former Iranian President Mahmoud Ahmadinejad threatened several times to wipe Israel from the face of the earth and under him Iran’s nuclear program has grown enormously in defiance of international sanctions. But Iran has a new president. Hassan Rouhani won a resounding victory in June, in part due to his promises of engagement with the West.

Certainly, the tone out of Tehran has taken a 180. Last week, Rouhani tweeted a happy new year to “all Jews, especially Iranian Jews” celebrating Rosh Hashanah. And his newly appointed Foreign Minister Mohammad Javad Zarif, who is widely expected to lead the new round of nuclear talks with the West later this month, tweeted at House Minority Leader Nancy Pelosi’s daughter that Iran “never denied” the Holocaust and “the man who was perceived to be denying it is now gone.” He was presumably referring to Ahmadinejad.

Rouhani’s tone on Syria has also been different, not so much in what he’s said but in what he hasn’t. In a speech before the Assembly of Experts on Wednesday, Rouhani said if Syria is attacked by the West, “the Islamic Republic of Iran will do its religious and humanitarian duty and send food and medicine.” He notably didn’t threaten bombs or retaliation. In other speeches, Rouhani has noted that Iran has bitter experience with chemical weapons: some 20,000 Iranian soldiers were killed and upwards of 100,000 Iranians were injured by Iraqis using chemical weapons during the Iran-Iraq War. “We completely and strongly condemn the use of chemical weapons, because the Islamic Republic of Iran is itself a victim of chemical weapons,” Rouhani said on Aug. 24, according to the ISNA News Agency.

Former Iranian President Akbar Hashemi Rafsanjani, a reformist who threw his support behind Rouhani before the elections, went so far as to blame the Assad regime for the attack, while most Iranian hardliners have blamed the Syrian opposition. The remarks were censored and he later issued a statement supporting the Syrian regime. Still, his remarks reflect the raging debate within Iran about Syria.

Not everyone in Iran has been so quick to step away from Assad, a fellow Shia whose family has been close with Tehran for decades. Islamic Revolutionary Guard Corps Commander-in-Chief Mohammad Jafari said on Aug. 31 that if the U.S. attacks Syria, it should expect “reactions beyond Syria’s borders.” And the Wall Street Journal, citing U.S. officials who intercepted messages from the Iranians, reported last week that the guard, which controls Iran’s military, has ordered retaliatory attacks on the U.S. embassies in Baghdad and Beirut should the U.S. strike Syria.

No matter the President, Iran is ultimately ruled by Supreme Leader Ali Khamenei, who has conspicuously not weighed in on the Syria since the chemical attack. Under previous new Administrations he has let the Presidents sort out their own politics. It’s only when they cross his bigger picture that he intervenes, swinging his support between the reformist and hardline factions since taking power in 1989.

Rouhani seems to have chosen Syria as the first big internal debate of his new Administration. There is no certainty that he will succeed in moderating the country. The creation in 1992 of Ansar e Hezbollah, a militant group often blamed for the killing or intimidation of reformers and students, was a direct reaction to Rafsanjani’s reformist foreign policies. And the last reformist President Mohammad Khatami, who was in office from 1997 to 2005, struggled and failed to wrest foreign policy from Revolutionary Guard hardliners. While he succeeded in many internal reforms, Khatami did little to improve relations with the West.

But the people of Iran may be ready for a change. When I was there late last summer, it was clear that Iranians weren’t particularly happy with Tehran’s unwavering support of Syria. Most of the bazaari wanted to see the money flowing to Syria spent instead propping up Iran’s faltering currency and economy. Add to that Assad’s use of chemical weapons, which are much reviled in Iran, and Rouhani might find popular support to weaken, if not break ties with Assad. And Iran might just be the only country Assad would listen to if they asked him to step aside. It is in both Washington and Tehran’s interests to prevent a failed state in Syria, and to stop Sunni radical al Qaeda factions from taking over the country. Such cooperation has been done before: Iran was a key ally in the U.S. invasion of Afghanistan, an Iranian neighbor, and with the toppling of the Taliban.

And, yet, Washington still casts Iran as the ultimate enemy here, while a debate rages in the U.S. about how the country should be engaged. “You can’t know what will happen on any of these fronts—nuclear, Syria, sanctions–until you sit down and talk,” says Anthony Cordesman, a foreign policy expert at the Center for Strategic and International Studies. “And you don’t know where they’ll be willing to give and take until you look at everything. It is long past time to talk to Iran.”