Russia also tells Assad to give up his chemical weapons 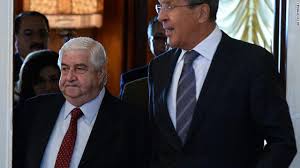 Russian Foreign Minister Sergei Lavrov called on Assad to put the arms under international control so they can be destroyed to avoid a conflict that he warns would cause an “outburst of terrorism” and spark a new wave of refugees.

His comment came after US Secretary of State John Kerry said Monday that Assad could resolve the crisis surrounding his purported use of chemical weapons by turning “every single bit” of his arsenal over to the international community by the end of the week. Kerry stressed that it was the only way to stop a military strike against the Assad forces.

Kerry spoke out after President Assad warned the United States “to expect everything” if it attacks in retaliation for his alleged use of chemical weapons that killed more than 1,400 civilians in Damascus.

Speaking in an interview to US television network CBS, Assad denied he was behind the chemical atrocity on August 21 and said the US had provided “not a single shred of evidence” that his forces were involved.

When pressed by CBS correspondent Charlie Rose about what would happen if the US attacked Syria, he replied “every action”.

Asked if that could include the use of more chemical weapons, he said: “That depends. If the rebels or the terrorists in this region or any other group have it, it could happen. I don’t know. I’m not a fortune teller to tell you what’s going to happen…”

Kerry described in London on Monday during a press conference the anticipated US-led strike as being “very limited, very targeted, very short-term” strike and added: “Let me be clear, the United States, President Obama, myself, others, are in full agreement that the end of the conflict in Syria requires a political solution. There is no military solution, we have no illusions about that.”