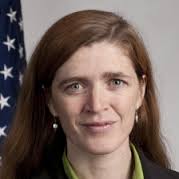 U.S. Ambassador Samantha Power has lashed into Russia at the United Nations, accusing Moscow of holding the Security Council “hostage” by blocking action against Syria and shirking its international responsibilities

Power says “The system has protected the prerogatives of Russia, the patron of a regime that would brazenly stage the world’s largest chemical weapons attack in a quarter century, when chemical weapons inspectors sent by the United Nations were just across town.”