Obama says world’s credibility on the line over Syria crisis 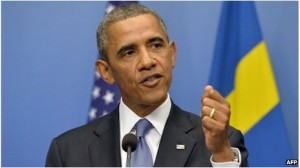 President Barack Obama has said the credibility of the US Congress and the international community is on the line over their response to Syria’s alleged use of chemical weapons.

Mr Obama, who was speaking in Sweden, is trying to build support in the US for military action against Syria.

He said the world should stick to its own red line against the use of “abhorrent” chemical weapons.

Congress will vote next week on whether to support the proposed action.

On Tuesday evening, members of the US Senate Committee on Foreign Relations agreed on a draft resolution to go before the house.

According to the draft resolution, the operation would be restricted to a “limited and tailored use of the United States Armed Forces against Syria”, and prohibit the use of any ground forces.

Mr Obama was asked in Stockholm whether the decision to ask Congress to vote before taking military action – which he was not constitutionally obliged to do – had put his credibility at stake.

“America and Congress’s credibility is on the line, because we give lip service to the notion that these international norms are important.”

He said he believed Congress would give its backing, because America “recognises that if the international community fails to maintain certain norms and standards that govern how countries interact and people are treated that over time this world becomes less safe”.

Mr Obama had previously said that the use of chemical weapons would cross a red line.

But he insisted that it was not he who set this line but the international community, by signing a treaty saying their use was “abhorrent”, and Congress by ratifying it.

The US has put the death toll from the alleged chemical attack on the outskirts of Damascus on 21 August at 1,429, though other countries and organisations have given lower figures.