Threat of strike on Syria deepens concerns in Lebanon 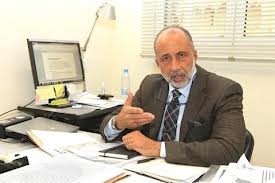 As Syria holds its breath for potential U.S.-led military strikes, its fragile neighbor Lebanon is bracing for the fallout.

The threat of cruise-missile strikes across the border brings another element of uncertainty for a country whose politics are closely intertwined with those of its larger neighbor and that has been attempting to cling to peace since the Syrian conflict began 21 / 2 years ago.

The pressures on Lebanon, a country that has been without a government since March amid sectarian wrangling, are multifold. Its economy has suffered, sectarian fault lines have been agitated, and kidnappings, rocket attacks and clashes increasingly punctuate daily life. Over the past month, tit-for-tat bombings have joined the fray, with bomb attacks on two mosques in the northern city of Tripoli on Friday killing more than 40 people in the worst bombing incident since the Lebanese civil war.

Adding to concerns is how the Lebanese Shiite movement Hezbollah might react to a cruise missile strike on the regime of Syrian President Bashar al-Assad, its ally. A strike launched from ships in the eastern Mediterranean could cross over Lebanon — though Adnan Mansour, the caretaker foreign minister, has told local media that the country’s airspace will not be open for use.

Still, amid the uncertainty, some airlines have adjusted their schedules to avoid night flights to Beirut.

In the background is the constant stream of refugees, straining Lebanon’s already-creaking infrastructure and competing for scarce work. The number of Syrian refugees is poised to cross the 2 million mark — the United Nations says that more than 700,000 of them are in Lebanon, while the government puts the number at well over 1 million, making at least one in every five people in the country a Syrian national.

Lebanese officials have expressed concern that any airstrikes will send another wave of Syrians over the border, with increasing numbers already crossing over in anticipation of attacks.

“This has already gone beyond our capacity, and we’ve reached a very dangerous level of tension between refugees and host communities in every single spot in this country,” said Ramzi Naaman, coordinator of Lebanon’s refu­gee response plan.

Naaman said new border restrictions have been imposed to curb the flow of refugees, with immigration officials being asked to ascertain whether those crossing are fleeing from areas of violence.

“This is a country that is politically torn,” he said. “These people are going into the labor market, which is causing a lot of competition. These are the perfect ingredients for a disaster.”

On highways and intersections across Beirut, Syrians cluster in the early mornings, hoping to find work. Some have been coming to Lebanon for years; others are newly displaced by violence. They complain that they are subject to curfews that do not apply to locals and that work is increasingly difficult to come by.

“I’ve been coming here for 15 years, and this is the hardest time I’ve known,” Abu Ali, a 45-year-old from Deir al-Zour, said as he waited on a highway where motorists stop to pick up casual workers for $15 or $20 a day. “A year ago we thought it was bad, but now it’s harder. This week there’s been nothing. Last week as well.”

The increasing divide between rich and poor is adding to instability, according to Georges Corm, a former Lebanese finance minister.

“There are two Lebanons,” he said. “There is the Monte Carlo, Dubai-style Lebanon which is a few square kilometers and has an average annual growth rate of 30 to 40 percent, and then there’s 10,400 square kilometers where people live in poverty and the situation is getting worse.”

But despite its inability to provide basic services, and at times appearing to be on the precipice of war, Lebanon has managed to cling on.

“Of course Lebanon is living dangerously, but it’s not the first time in its history, and there’s a natural resilience,” Corm said. “Lebanon has never had a strong state. It’s always under pressure of fracture, but it’s capable of self-managing itself in very difficult situations. This is the positive nature of Lebanon — it goes on, in spite of everything.”

Corm said that economically, things are not as bad as they are made out to be, with well-off Syrians making up for the lack of Persian Gulf tourists who once frequented Beirut’s designer stores. In addition, property and financial markets remain buoyant, he said.

Still, outside his office in the Lebanese capital’s sleek downtown district, shops and restaurants are newly shuttered. Gulf states have issued travel warnings.

Meanwhile, Lebanese politicians and residents say they are concerned that U.S.-led strikes in Syria could lead to further instability, especially if Hezbollah launches a retaliatory attack against U.S. ally Israel. Several pro-Hezbollah news sites reported Monday that the group was repositioning in southern Lebanon in anticipation of a U.S. attack. A Hezbollah official declined to comment.

In Beirut’s upmarket Christian neighborhood of Achrafiyeh, residents expressed concern. “There could be repercussions across the region,” said Charles Worden, a 50-year-old Lebanese businessman. “Maybe Hezbollah will do something to retaliate against Israel. If Assad thinks the end is near, he will try to do anything to stay in power. He will burn Lebanon and the whole region with him.”

Paul Salem, director of the Carnegie Middle East Center in Beirut, predicted that Hezbollah’s response would be muted, provided any U.S.-led attack was narrow and didn’t upset the balance of power.

“If it’s limited, semi-symbolic, it probably won’t have many repercussions,” he said. “The regime will withstand and claim victory that they survived an attack by a superpower, so they’ll feel no need for an escalation or a retaliation.”

Salem said that Hezbollah may respond by firing a few rockets at Israel but that any response would be “calibrated not to be seen as a major retaliation.”

Still, some Beirut residents questioned the point of gambling with regional security for strikes of such a limited scope.

Photo: Ramzi Naaman, head coordinator of Lebanon’s Syria response plan, is charged with advising Prime Minister Najib Mikati on how to approach the worsening humanitarian problem refugees are facing. He was quoted last August as saying: “The huge number of Syrian refugees has surpassed by far Lebanon’s capacity… 45 percent of the Lebanese villages contain more Syrians now than their original population. Won’t the Lebanese citizens be scared? First, this is a foreign presence. Second, the Lebanese are starting to suffer from an economic condition, because they now have competition since the Syrians are looking to make a living. This is building up a lot of tension in the villages. “