Secretary of State John Kerry said Sunday that samples collected by first responders after the reported August 21 chemical weapons attack in Syria have tested positive for the nerve agent Sarin.

“In the last 24 hours, we have learned through samples that were provided to the United States that have now been tested from first responders in east Damascus and hair samples and blood samples have tested positive for signatures of Sarin,” Kerry said on NBC’s Meet The Press. “So this case is building and this case will build.”

Sarin is a man-made chemical warfare agent considered the most toxic and fast-acting of its kind. The odorless, colorless nerve agent interferes with an enzyme called acetylcholinesterase, which controls nerve signals to the muscles.

Kerry said the use of chemical weapons puts Syrian President Bashar Assad in the same category as the world’s most bloody dictators.

“Bashar Assad now joins the list of Adolph Hitler and Saddam Hussein [who] have used these weapons in time of war,” he said. 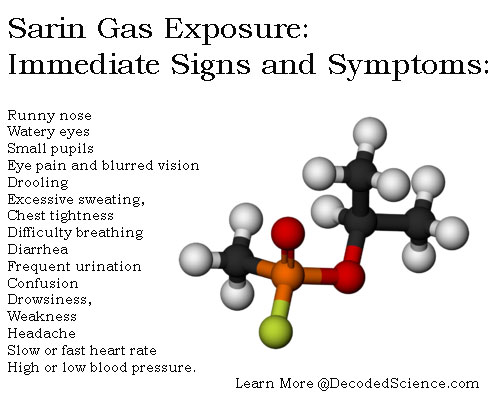 Kerry’s statement comes the day after President Barack Obama announced that he will seek congressional authorization for a military strike in Syria. The U.S. has said it has “high confidence” in intelligence assessments that show the chemical weapons attack that killed over 1400 people – including hundreds of children – was launched by the Syrian regime.

The former Massachusetts senator said Sunday that he believes Congress will pass a measure to authorize the use of force in Syria.

“I don’t believe that my former colleagues in the United States Senate and the House will turn their backs on all of our interests, on the
credibility of our country, on the norm with respect to the enforcement of the prohibition against the use of chemical weapons, which has been in place since 1925,” he said.

But Kerry would not say whether the president would act even if Congress votes against intervention .

“I said that the president has the authority to act, but the Congress is going to do what’s right here,” he answered when pressed by NBC’s David Gregory.

In a forceful speech on Friday, Kerry called Syrian President Bashar Assad a “thug and a murderer” who turned chemical weapons on innocent people in east Damascus.

“This is the indiscriminate, inconceivable horror of chemical weapons,” he said. “This is what Assad did to his own people.”

On Sunday, Kerry declined to describe the new evidence of Sarin use as a ‘slam dunk’ in the case against Assad, but he reiterated that the United States continues to have “high confidence” in its case against the regime.

“The word “slam-dunk” should be retired from American national security issues,” he said. “We are saying that the high confidence that the intelligence community has expressed and the case that I laid out the other day is growing stronger by the day.”