Pope breaks with protocol by bowing to Queen Rania of Jordan

As head of state at the Vatican, not to mention the leader of the world’s 1.2 billion catholics, protocol requires visitors to bow to him when they meet him at the Holy See.

But Francis, who has made the forgetting of formalities a trademark of his papacy, bowed when he met a smiling Rania as she visited the Vatican with her husband King Abdullah II on Thursday.

“Up until the 19th century visitors would kiss the pope’s shoes, and the tradition is still that all visitors, women included, bow to him, but Francis behaves as he did before he became pope and is not interested in protocol,” a senior Vatican official told The Daily Telegraph.

It is not the first time the Pope has eschewed formality when receiving visitors.

When Cristina Kirchner, Argentina’s president, met him in March, a day before his formal inauguration, he gave her a kiss after she presented him with a gourd for mate, the traditional Argentine tea.

“Never in my life has a Pope kissed me!”, Mrs Kirchner said afterwards.

When she met the pope in July, Brazilian’s first female president, Dilma Rousseff took the initiative, kissing Francis on both cheeks.

Francis’ bow was just the latest in a series of signs the pope has no time for ceremony.

On Wednesday he showed up in central Rome for a religious ceremony in an unmarked Ford, without the papal flag or number plate, driven by a Vatican gendarme.

He then entered the church carrying his folded mitre tucked under one arm. The incident recalled his carrying a personal briefcase up the steps to the plane on which he flew to Brazil in July. 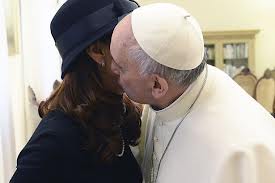 Meanwhile, the Pope is reportedly getting ready to shake up bureaucracy by replacing Cardinal Tarcisio Bertone, the influential secretary of state who has been in office since 2006 and has been criticised for favouritism.