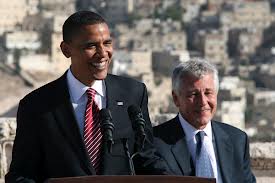 With a flurry of diplomatic signals and activity, U.S. officials sought Tuesday to lay the groundwork for a possible military strike on Syria in response to last week’s suspected chemical weapons attack that Washington blames on President Bashar al-Assad’s regime.

Secretary of Defense Chuck Hagel and Secretary of State John Kerry consulted allies and indicated potential imminent action by a coalition likely to include key NATO partners and regional powers.

Days after the United States moved warships armed with cruise missiles into the region, Hagel told the BBC on Tuesday that forces were ready to carry out a strike if ordered. A senior Defense Department official told CNN that any strike could be completed “within several days.”

“We are ready to go, like that,” Hagel told the BBC, adding that “the options are there, the United States Department of Defense is ready to carry out those options.”

White House: No decision yet

The White House insists President Barack Obama has yet to make a final decision on how to respond to what U.S. officials characterize as the worst chemical weapons attack since former Iraqi strongman Saddam Hussein launched a poison gas attack that killed thousands of Kurds in 1988.

White House spokesman Jay Carney said Tuesday there is “no doubt” that chemical weapons were used in Syria last week, and little doubt that the al-Assad regime was responsible.

The president continued to review options for a response, Carney said, adding that “nothing has been decided.” But some sort of response will come, Carney said.

Choosing not to respond, he said, would invite further use of chemical weapons.

“The consequences of that, given the volatility of the region … would be very serious indeed,” he said.

Obama spoke Tuesday with Canadian Prime Minister Stephen Harper about “potential responses” in Syria, according to a White House statement.

Carney said Monday that the first step toward a military response in Syria would be the public release of a U.S. intelligence report on the August 21 event near Damascus that reportedly killed and wounded thousands.

That was planned to happen on Tuesday, according to a U.S. official who was not authorized to speak on the record.

Citing Kerry’s strong statement Monday that essentially blamed the Syrian government for what the secretary called an “undeniable” chemical weapons attack and the expected release of the intelligence report, the official said the administration was “laying out the case for any action if and when President Obama decides.”

Another official said the intelligence report would include forensic evidence and intercepted communications among Syrian military commanders.

However, last week’s attack obliterated the “red line” Obama set just over a year ago against the use of Syria’s chemical weapons stocks.

To Republican Rep. Peter King of New York, an influential member of the House Homeland Security Committee, the U.S. response to the Syria situation will influence another regional proliferation issue — Iran’s potential development of nuclear weapons.

Obama “time and again has basically said that Iran will not be allowed to have nuclear weapons, that’s the red line,” King told CNN on Monday, adding that failure to enforce a similar threat against Syria on chemical weapons would undermine the president.

“This is as much a warning to Iran as I see it, as it is action against Syria,” King said.

Democratic Sen. Jack Reed of Rhode Island, a member of the Senate Armed Services Committee, told CNN on Monday that the United States should only act in concert with an international coalition from at least NATO allies and Arab League members.

“Without their participation, it looks as if this is just a Western-vs.-Islamic struggle. It’s not,” Reed said. “This is to vindicate a basic rule of international law that these weapons will not be used, not by Iran, not by any power.”

Reed said the most realistic option would be cruise missiles launched from U.S. Navy ships at sea, noting that “we can have precision weapons that could be fired and keep our aircraft out of Syrian airspace and away from their anti-aircraft systems.”

Earlier, a senior administration official said Obama will be presented with final options regarding actions against Syria in the next few days. Assuming the president decides to go ahead with a military response, any action could come as early as mid-week, though it could be later, the official cautioned.

Factors weighing into the timing of any action include a desire to get it done before the president leaves for Russia next week for a summit with G8 allies, and before the administration has to make a decision on whether to suspend aid to Egypt because of the ongoing political turmoil there, the official explained.

American officials are consulting with allies to ensure they are supportive of any U.S. action, which the senior administration official said would be very limited in scope and a direct reaction to the use of chemical weapons. Representatives of three allied governments involved in those top-level consultations said the goal is to reach a consensus as soon as possible.

“No one is talking about a long process,” one European diplomat told CNN.

Marie Harf, a State Department spokeswoman, said Kerry spoke Monday with his British, Jordanian, Qatari and Saudi counterparts, as well as the secretary-general of the Arab League.

Obama “will be making an informed decision about how to respond to this indiscriminate use” of chemical weapons, Kerry told reporters, adding that the president “believes there must be accountability” for those who use them.

Also Monday, a White House official ruled out sending ground troops to Syria or implementing a no-fly zone to blunt al-Assad’s aerial superiority over rebels fighting to oust his regime.

While U.N. Secretary-General Ban Ki-moon said Monday that the use of chemical weapons was a crime against humanity and must be punished, certain opposition by Syrian ally Russia and possibly China undermined the possibility that the Security Council would support a military mission.

Instead, a limited coalition of NATO partners such as Germany, France and Britain — all of which have called for action against Syria — and some Arab League members appeared more likely to provide the political backing needed by Obama to order U.S. missile strikes.

Last month, Joint Chiefs Chairman Gen. Martin Dempsey provided Congress with a list of declassified U.S. military options for Syria that emphasized the high costs and risks of what he said would amount to “an act of war” at a time of deep budget cuts.

Dempsey’s letter, dated July 19, listed U.S. assets in the region including Patriot missile defense batteries in Turkey and Jordan, as well as F-16 jet fighters positioned to defend Jordan from possible cross-border trouble. In addition, the Pentagon has sent four warships armed with cruise missiles to the region.

According to U.S. officials, updated options offered to the president in recent days included:

• Cruise missiles fired from one of four Navy destroyers deployed in the Mediterranean Sea. The missiles would be used to strike “command and control” facilities such as command bunkers, or the Syrian regime’s means of delivering chemical weapons: artillery batteries and launchers. There is no indication that the missiles would strike actual chemical weapons stockpiles.

To Aaron David Miller, a vice president at the Woodrow Wilson International Center, the situation is forcing Obama to shift from being an “avoider-in-chief” regarding military involvement in Syria.

“It’s almost inevitable that the president will authorize some form of military action,” Miller told National Public Radio in an interview broadcast Monday.

He said he expected a significant response that amounts to “a warning that lays down this time a red line that the president intends to enforce, not one that turns pink.”

“It cannot simply be a couple of cruise missiles into a storage shed somewhere,” Miller said, adding that the goal was to deter al-Assad rather than topple him or radically shift the balance in Syria at this time. “The president’s not on the verge of becoming the cavalry to rescue the country.”