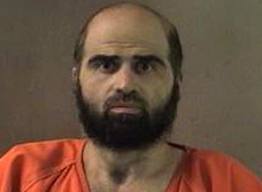 Nidal Malik Hasan, the Army psychiatrist who opened fire on dozens of soldiers at Fort Hood., Tex., was found guilty Friday of murdering 13 people, taking him one step closer to becoming the first active-duty soldier to be executed in more than 50 years.

Hasan, who acted as his own attorney but demonstrated little interest in mounting a defense, was convicted on 13 charges of premeditated murder and 32 of attempted murder by a panel of senior officers. He showed no reaction as the verdict was read, according to news agencies. In the courtroom were several survivors of the attack and relatives of those killed, and some began to cry after Hasan and the panel had left the room.

The case will now move to a sentencing phase, during which more witnesses may be called and the 42-year-old major could testify before a punishment is handed down.

The unanimous verdict closes a key chapter in one of the most painful episodes in recent U.S. military history. The FBI and Defense Department have been criticized for failing to spot warning signs that Hasan had become radicalized, and survivors have accused the government of abandoning them and depriving them of financial benefits.

Hasan, a U.S.-born Muslim, admitted responsibility for the shooting at the start of the trial, saying he had been on the wrong side of a war against Islam and had switched over. During the proceedings, he declined to call any witnesses, testify or give a closing argument. He was prohibited by military law from entering a guilty plea.

At a pretrial hearing, the judge, Col. Tara Osborn, ruled that Hasan could not defend himself by arguing that he carried out the killings to protect Taliban leaders in Afghanistan. Instead, the defendant chose to make his case to the public through communiques and authorized leaks to newspapers, arguing that he was waging jihad because of the United States’ “illegal and immoral aggression against Muslims” in Iraq and Afghanistan.

During the court-martial, Osborn refused a request by Hasan’s three standby attorneys to limit their role because they believed the defendant was trying to secure a death sentence.

Experts said that despite Hasan’s apparent desire to be executed, it will be years before a potential death sentence could be carried out. Under the military’s justice system, there are several automatic appeal stages, during which lawyers are likely to be appointed to represent Hasan, regardless of his wishes.

After a sentence is handed down, the court’s records and findings require the review and approval of a military official known as the convening authority.

The case will then enter the appellate phase, going before the appeals courts for the Army and the armed forces. The case can be appealed to the Supreme Court. Lastly, the president would have to sign off on a death sentence. The last time an active-duty soldier was executed was in 1961.

Eugene R. Fidell, who teaches military justice at Yale Law School, said he expected the appeals process to take several years. “It’s most likely to be the next president that’s going to have to make the final decision,” he said.

Greg Rinckey, a former U.S. Army Judge Advocate General’s Corps attorney, said the appeals courts are highly unlikely to allow Hasan to represent himself and his appointed attorney could lodge a number of challenges.

“Part of defense strategy in this case will be delays . . . [and] I think they’re going to file mental-health issues, whether he had the capacity to stand trial, ineffective assistance of counsel,” Rinckey said.

Hasan, who worked at Walter Reed Army Medical Center from 2003 to 2006, had been due to deploy to Afghanistan within a few weeks of the attack, and prosecutors presented evidence of his meticulous planning. The Army major and psychiatrist chose the most high-tech, high-capacity weapon available at a gun store in Killeen, Tex., and trained himself at a local firing range before giving away some of his belongings on the day of the shooting.

Twelve people who were killed were soldiers waiting for medical tests; the other was a civilian who tried to tackle the psychiatrist. Hasan was left paralyzed from the chest down after being shot by an Army police officer and now uses a wheelchair.

The shootings exposed a number of failings by the Defense Department, which a Pentagon report concluded was unprepared for internal threats, and by the FBI. On one occasion, Hasan gave a presentation to senior Army doctors in which he discussed Islam and suicide bombers and warned that Muslims should be allowed to leave the armed forces as conscientious objectors to avoid “adverse events.”

The FBI was also aware that Hasan had exchanged 18 e-mails with Anwar al-Awlaki, a radical U.S.-born Islamic cleric who was a leading figure in al-Qaeda in the Arabian Peninsula before he was killed by a U.S. drone strike in 2011. However, the e-mails were dismissed as legitimate research, and the Defense Department was not informed.

During the sentencing phase, the prosecution and defense can present evidence on the impact of the crime and any mitigating circumstances. The approval of three-quarters of the military jury is required for a prison term of more than 10 years; the death penalty requires a unanimous decision.