Pope Emeritus Benedict: I resigned because ‘God told me to’ 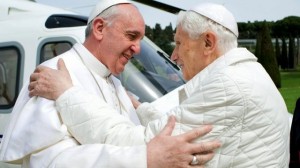 Pope Emeritus Benedict XVI said this week that he stepped away from the papacy on the orders of God.

“God told me to” during a “mystical experience,” he said, as the Voice of America reported.

Benedict resigned as pontiff in February, to the shock of the Catholic community. He’s the first pope to give up the role in about 600 years, VOA said.

The pope emeritus apparently made the statement about God’s role in the resignation to a visitor in the Vatican gardens, who asked to remain anonymous but relayed the information to the press. The former pope also said God did not speak in a vision — but he did not specify the nature of the “mystical experience,” VOA reported.

Italian media outlets, meanwhile, take a more cynical approach with the deciding factors of the pope’s resignation. Italy’s press claims his decision stems more from corruption scandals that tainted his papacy, which lasted eight years, than from any divine intervention.