Abduction of Turkish pilots linked to Shiite hostages in Syria 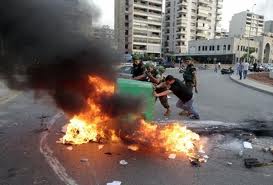 Lebanon’s National News Agency said that the previously unknown group “Visitors ( Zouwar) of Imam al-Rida ” which claimed responsibility for kidnapping the two Turkish pilots issued a statement on Friday saying that the (Turkish ) pilots “will only be released when the Lebanese hostages in Syria return to Lebanon.

Early on Friday, gunmen stopped a bus boarded it and kidnapped a pilot and a co-pilot working for Turkish Airlines on Beirut’s airport road, Lebanon’s caretaker Interior Minister Marwan Charbel told reporters . They were riding the bus from Rafic Hariri International Airport to their hotel when the assailants in two vehicles stopped it.

Charbel said that very little is known about the “Visitors ( Zouwar) of Imam al-Rida ” group . But according to reports the group is named after Alī ibn Musa al-Riḍā , who was known as an Imam of knowledge and who was the seventh descendant of the Islamic prophet Muhammad and the eighth of the Twelve Imams, according to the Shiite sect of Islam.

It appears from the statement quoted by NA , this group is connected to the relatives of the 11 Shiite pilgrims who were kidnapped in Syria in May 2012 on their way from Iran to Lebanon. Turkey  was involved in trying to help the Lebanese government in its negotiation to free the pilgrims from the Syrian rebels who kidnapped them in an Aleppo province.

Turkey   which  had nothing to do with the kidnapping , was accused by the relatives of not doing enough to free the pilgrims and for this reason they arranged during the past several months several rallies, sit-ins and protests against Turkish Airlines and the Turkish embassy in Beirut to pressure the Turkish government to do more.

One of the spokespersons for the Shiite pilgrims’ relatives , Sheikh Abbas Zgheib who is a also a member of the Highest Shiite council denied responsibility for the kidnapping of two Turkish pilots in Lebanon but sounded elated.

Turkey supports the Sunni Muslim rebels fighting to topple the regime of Syrian President Bashar Assad, which is dominated by Alawites, an offshoot sect of Shi’ite Islam.

A spokesman for Turkish Airlines Ali Genc identified the two pilots as Murat Akpinar and Murat Agca. No other information was revealed about the pilots

The Lebanese are deeply divided over Syria’s civil war, with Shiites largely supporting the regime in Damascus and Sunnis backing the rebels. Both Sunni militants, and fighters from Lebanon’s dominant Shi’ite Hezbollah group, have been fighting on opposite sides in the conflict.

The conflict in Syria has claimed more than 100,000 lives since it erupted in March 2011. The fighting frequently has spilled into Lebanon.

As expected Turkey’s Foreign Ministry issued a travel advisory on Friday in which it called on Turkish citizens to avoid traveling to Lebanon unless it is absolutely necessary . This move is expected to deal another blow to Lebanon’s tourism industry which has been suffering ever since the uprising in Syria erupted nearly two and a half years ago .

Photo : One of the protests in Beirut (by relatives of the Lebanese  Shiites hostages in Syria ) against the Turkish establishments in Lebanon. On June 2012 they blocked the airport road with burning tires.