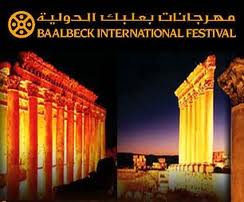 BAALBEK, Lebanon — Under the towering columns of the Roman temples here, the Baalbek International Festival over the years has brought the likes of Mstislav Rostropovich, Miles Davis, Sting and the Egyptian singer Umm Kulthum for an annual musical celebration that for many Lebanese symbolizes the openness and cultural richness that coexists with their country’s periodic instability and war.

But this year, war — this time in neighboring Syria — has the upper hand. It has forced the festival — not for the first time in its history — to change course. First, as ripples from the conflict edged closer to Baalbek, near the Syrian border in the Bekaa Valley, security concerns cost the festival a major performer, the soprano Renée Fleming. Next, the festival committee reluctantly moved the remaining concerts, which start on Aug. 17, to a 19th-century former silk factory on the outskirts of the capital, Beirut.

The festival’s devotees, including the members of its nonprofit and often under financed committee, consider the move — and the refusal to cancel — a pledge of resilience and determination.

“The mission that transcends all wars is culture,” said Rana Hadid, an architect whose grandmother helped found the festival in 1956. “This is what will save Lebanon. We have to hold on to these institutions — there are so few of them — that believe in Lebanon.”

The festival committee’s offices, in the bustling Basta district of Beirut, are festooned with posters of Charles Mingus and the Lebanese chanteuse Fairouz, contrasting with the political posters outside that highlight a political divide that threatens Lebanon with new violence spilling over from Syria. Placards in shop fronts honor Hezbollah, the powerful Lebanese Shiite militant group and political party, and its ally Bashar al-Assad, the Syrian president.

Just a few blocks away, black flags with Koranic script signal support for the more radical Islamist wing of the mostly Sunni insurgency fighting Mr. Assad. In these neighborhoods, Hezbollah, seen as backing a murderous crackdown by Mr. Assad, is reviled; some do not shy from calling for attacks on pro-Hezbollah Shiite neighborhoods, like the one that recently left more than 50 people injured in Beirut’s southern suburbs.

“At root of it all, the Lebanese are being pulled apart,” Ms. Hadid said. “It’s been hard to say we’re above all this.”

She and her colleagues see the festival as a beacon for Lebanese who want their country to be known at home and abroad for its mountains and beaches, its freewheeling atmosphere, its cosmopolitanism and history — a mission challenged over the years by Lebanon’s own civil war, conflicts with Israel and lingering internal tensions.

The festival became known worldwide during Lebanon’s heyday in the 1960s and has long brought music lovers to the breezy Bekaa slopes not just from humid Beirut, a two-hour drive away, but also from across the Arab world and beyond. It helped turn Fairouz into a national and regional star and promoted modern Arab theater and dance, which has been performed to a global audience under the stars alongside Nureyev and Jean-Pierre Rampal and the New York Philharmonic. The early 1970s brought the Paul Taylor Dance Company, Ella Fitzgerald and Mingus, in a white hat and bell bottoms. In 1974, Joan Baez sang “Blowin’ in the Wind.”

But problems were brewing as Lebanon’s many sects jostled for power alongside Palestinian militias then based here, and by 1975, the country was being torn by the civil war, forcing a halt to the festival. In a nostalgic video produced by the festival committee, Ms. Baez’s Baalbek rendition of that antiwar anthem plays over video images of gunmen in the streets of Beirut and smoke billowing over its Mediterranean seafront. The civil war raged until 1990.

In 1996, the festival returned, recapturing much of its following and adding Sting and Plácido Domingo to its roster. It has run continuously since, except for a canceled 2006 season during the war that broke out after Hezbollah captured Israeli soldiers in a cross-border raid and Israel unleashed bombs across Lebanon. Now it struggles with a newer problem, linked to the rise of Hezbollah. The group, with roots in the Bekaa, came to prominence fighting Israeli occupation and has become the dominant political force in the country including, increasingly, in the city of Baalbek.

Baalbek is a quiet, normally secure place, with a mix of Shiites, Sunnis and Christians. Ducks swim in a pond in a the central square full of cafes. Alcohol is served in some restaurants. The festival works well with the municipal government, Ms. Hadid said; it has sometimes adjusted concert times so as not to conflict with the call to prayer that rises from nearby mosques. Other times, performers have paused to listen to the musical invocation.

The setting’s magical appeal remains evident. The ruins of the ancient city of Heliopolis, some of the world’s largest and best-preserved Roman architectural relics, stand mostly deserted for much of the year. Visitors are free to scramble over the massive stone blocks of the temples of Jupiter and Bacchus, with grass and wildflowers sprouting between them in places.

But in a country where sectarian mistrust lingers, Ms. Hadid said, some Lebanese are afraid to come and fewer and fewer people spend the night in Baalbek after the festival. More broadly, the Syrian conflict has now decimated Lebanon’s tourist season two years running.

Tens of thousands of Syrian refugees have flooded the city, and are still pouring in. Hezbollah has sent fighters to support the Syrian government, and military convoys — and funeral processions — trundle openly along the roads of the Bekaa. Syrian rebels, mostly Sunnis, and their Lebanese sympathizers have retaliated, increasing fears of sectarian conflict. They were suspected of firing rockets last month into the town’s outskirts, probably trying to jab at their enemy but in effect terrifying residents, not to mention the ticket-buying culturati.

The loss of Ms. Fleming was a serious blow to the festival. In a statement, she said she was sad to withdraw but felt obliged to heed the latest State Department warning urging Americans to avoid all travel to Lebanon. “I look forward to a time when these conditions have abated, especially for the sake of those in the region,” she said, “and also so that I can experience the legendary kindness and hospitality of the Lebanese people.”

The Syrian war has also driven away regular summer visitors, including wealthy gulf Arabs and even some Lebanese expatriates. That economic crisis has made it even harder for the festival organizers, who receive a third of their financing from the state but must raise the rest. But the lineup still includes prominent names, like the rock singer Marianne Faithfull and the revered Lebanese oud player Marcel Khalife. For the move, the organizers opted for the silk factory, currently used for weddings and other events. Situated in an industrial Beirut neighborhood, it has graceful arches and stone walls that glow in the sunset.

Ms. Hadid said the committee wanted to promote architectural preservation and bring people to a place they had never noticed. But, she added, “it’s nothing like Baalbek.”