Syrian rebel fighters armed with anti-tank missiles pushed toward President Bashar al-Assad’s hometown of Qardaha on Monday, the second day of a surprise offensive in the heartland of his minority Alawite sect, opposition activists said.

On Sunday rebel fighters captured half a dozen villages on the northern tip of the Alawite Mountain, located east of the port city of Latakia. The area is the main recruiting ground for Assad’s core praetorian guard units comprising the Republican Guards, Fourth Division and special forces.

Those pro-Assad fighters are mostly centered in Damascus where they are spearheading operations against mainly Sunni rebels battling against four decades of rule by Assad and his late father.

“Dozens of the regime’s forces have been killed in the last two days. The objective is to liberate our people in Latakia, and that would entail passing through Qardaha,” said Salim Omar, an activist from the Sham News Network opposition monitoring organization.

“This is a war from hilltop to hilltop. The region is rugged and tanks are not much use for the regime,” Omar said from an undisclosed location on the coast.

He said the rebel units, which include the Nusra Front and the Islamic State of Iraq and the Levant, two groups linked to al Qaeda, destroyed three tanks positioned at an army mountain position overlooking the town of Salma, a Sunni village on the edge of the Alawite Mountain.

“The rebels are attacking with the anti-tank missiles, which is giving them a devastating edge in this terrain. The shabbiha (pro-Assad militia) have taken a hit to their morale. They thought tanks could protect them,” Omar said.

Video footage taken by activists showed rebels firing Russian-made Konkurs anti-tank missiles from a rocky terrain, and praying next to a tank after taking the army position overlooking Salma. Other footage showed fighters from Ansar al-Sham brigade firing a Grad surface-to-surface missile at a mountaintop.

The footage could not be independently verified. Syrian state media have not commented on the battles.

Ahmad Abdelqader, an activist attached to the Ahrar al-Jabal Brigade, one of the groups involved in the operation, said hundreds of Alawite villagers have fled the region toward Latakia.

“The objective is to reach Qardaha and hurt them like they are hurting us. The Alawites have been huddling in their mountain thinking that they can destroy Syria and remain immune,” he said.

Qardaha contains the mausoleum of Assad’s father, Hafez al-Assad, but is home to several Alawite clans who have not seen eye to eye with the younger Assad over his handling of the uprising.

Last year, the arrest of veteran human rights campaigner Abdelaziz al-Khayyer, a former political prisoner and a member of a prominent family in Qardaha, sparked disturbances in the town, Alawite activists said.

“The rebels are not far from Qardaha, and the threat to Qardaha has moved from being conceivable to being a real one,” said Sheikh Anas Ayrount, a member of the Syrian National Coalition who is from the coastal city of Banias.

Assad’s Alawite sect, an offshoot of Shi’ite Islam, has controlled Syria since its members took over main units of the army and the security apparatus in the 1960s.

The sect has traditionally lived in the ancestral Alawite Mountains, but members of the community moved in large numbers in the last three decades to cities on the coast and in the interior, lured by preferential jobs in the government, army and security apparatus.

More than 100,000 people have been killed since the uprising against Assad family rule erupted in 2011, beginning with peaceful demonstrations that were crushed by soldiers using live ammunition and tanks, sparking an armed insurgency.

Hardline Islamists now dominate the Sunni Muslim brigades that have fueled the uprising.

Although thousands of pro-Assad forces have been killed in fighting, most of the civilian victims have been Sunni, sparking increased calls in the community to target Alawite regions.

Assad, with support from Shi’ite-dominated Iran and Lebanese Hezbollah guerrillas, has gained ground, mainly in the center of the country in recent months. In recent weeks rebel brigades have hit back in the northern province of Aleppo and the southern province of Deraa, the cradle of the revolt.

A source in Latakia, speaking on condition of anonymity, said Sunday’s fighting started at dawn and that the rebels, based in the town of Salma, attacked 10 Alawite villages.

Sirens from ambulances, punctuated by the sound of bombardment and government air raids on Salma, could be heard throughout the day, the source said.

A senior opposition figure, who declined to be named, said the United States, a main backer of the Free Syrian Army, is against targeting Latakia, because it could spark revenge attacks by Alawites against its majority Sunni population and add to an already huge refugee problem.

Diplomats say the coastal area and its mountain villages could be the scene of a bloodbath against the region’s Alawite population if Islamist hardliners end up eventually gaining the upper hand in the conflict. 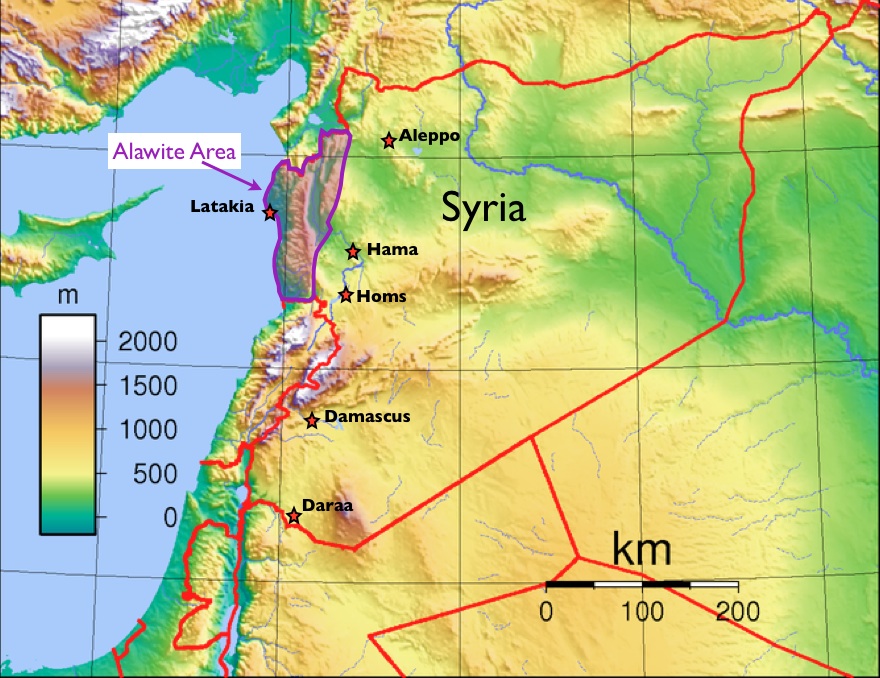