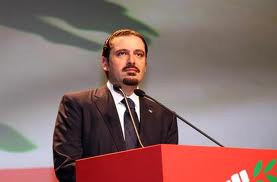 Former Lebanese PM and Future Movement leader Saad Hariri slammed Hezbollah’s involvement in Syria and accused the party of being responsible for aggravating the situation in Lebanon and the region .

Hariri who has been absent from Lebanon for over 2 years for security reasons said in a televised speech marking the last Ramadan Friday Iftar :” For years we gathered in Ramadan at the residence of late Prime Minister Rafik Hariri without mediators. Today we meet and geography is separating us because of the circumstances imposed on us. May God curse those who caused them.”

Commenting on the rockets that were fired at the presidential palace last night he said:
“The Rockets that targeted Baabda Palace are a terrorist act that aims to target the state’s symbols and to overrule the Baabda Declaration.

Referring to the 2006 Hezbollah war with Israel which ended in August that year he said:
“Hezbollah single-handedly took the strategic decision to go through the 2006 war.”

Lebanon’s defense strategy based on Hezbollah’s weapons as a need is no longer viable for many reasons.

These weapons have become a means to intimidate and scare political foes, as what happened in 2008.
The use of these weapons has shifted from fighting the enemy to fighting the Syrian people.
These arms have become a direct reason for civil division. They lack consensus among the parties and the majority’s approval.
Lebanon will not live in the jungle of illegitimate arms any more.
We all have no exit route unless weapons are restricted to the state.
Illegitimate arms and the state cannot coexist .

“All involvement in the Syrian crisis should stop”, he said

He added (president) Suleiman has announced a responsible stance calling for reconsidering the defense strategy.

“We are in favor of this approach”.

What will the party say to the Lebanese and to the victims’ families then? Will it declare war against the new Syrian regime?

We want the army to be the sole component of the defense strategy, defending the country’s land sovereignty.

We want this army to be an army that defends all of Lebanon, with no partner who holds arms.