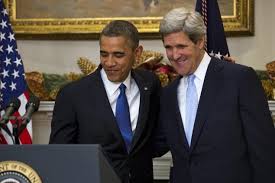 President Barack Obama says the relaunch of Israeli-Palestinian peace talks is a promising step forward. But he says the most difficult work is yet to come.

With senior Israeli and Palestinian negotiators en route to Washington, Obama says he hopes both parties will approach negotiations with good faith, determination and sustained focus. He’s praising Secretary of State John Kerry for bringing the parties together and former U.S. Ambassador Martin Indyk for agreeing to shepherd the talks.

Obama says he saw the profound desire Palestinians and Israelis both have for peace when he visited the region in March.

Obama and Kerry will meet Monday afternoon before the talks get underway in the evening.