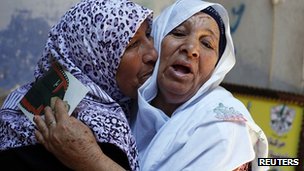 Israeli and Palestinian negotiators will resume peace talks in Washington on Monday, the US State Department has announced.

The talks, stalled since 2010, follow months of shuttle diplomacy by US Secretary of State John Kerry.

The statement came hours after Israel approved the release of more than 100 Palestinian prisoners.

The release – which split the Israeli cabinet – is to take place in stages over several months.

US State Department spokeswoman Jen Psaki said the initial talks would begin on Monday evening and continue on Tuesday.

She said Mr Kerry had called Israeli Prime Minister Benjamin Netanyahu and Palestinian President Mahmoud Abbas on Sunday and they had agreed that the talks would “serve as an opportunity to develop a procedural work plan for how the parties can proceed with the negotiations in the coming months”.

Ms Psaki suggested the initial talks would be to chart a way forward rather than try to tackle the thorny issues between the two sides.

Major sticking points include the future of Israeli settlements on the West Bank, the status of Jerusalem and the fate of Palestinian refugees.

The issue of settlement-building halted the last direct talks in September 2010.

Settlements are considered illegal under international law, although Israel disputes this.

Mr Kerry said in a statement: “Both leaders have demonstrated a willingness to make difficult decisions that have been instrumental in getting to this point. We are grateful for their leadership.”

The BBC’s Katy Watson in Washington says that in the five months that Mr Kerry has been secretary of state he has visited the region six times in an effort to restart talks, so today’s statement is seen as a big step forward.

However, these are talks about talks and although a welcome development it is still very early days, she adds.

Earlier on Sunday, the Israeli cabinet approved the release of Palestinian prisoners by 13 votes to seven.

Some 104 long-term prisoners will be released in four stages over a number of months, linked to progress in the peace process.

Sunday’s cabinet meeting was delayed by an hour as Mr Netanyahu sought support for his proposal.

“But there are moments in which tough decisions must be made for the good of the nation and this is one of those moments.”

The cabinet also approved a draft bill requiring a referendum for any peace agreement with the Palestinians that involves territorial concessions.

Mr Netanyahu’s office said it was important that every citizen voted directly on such historic decisions.

Top Photo: The mother of a Palestinian prisoner, right, was overwhelmed by news of his possible release