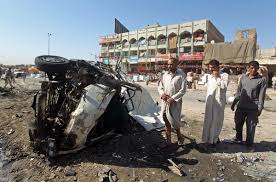 Car bombs ripped through busy streets and markets in Iraq on Monday, killing at least 60 people in predominantly Shi’ite areas in some of the deadliest violence since Sunni insurgents stepped up attacks this year.

The 17 blasts, which appeared to be coordinated, were concentrated on towns and cities in Iraq’s mainly Shi’ite south, and districts of the capital where Shi’ites live.

Militant groups including al Qaeda have increased attacks in recent months in an insurgency against the Shi’ite-led government as a civil war in neighboring Syria heightens sectarian tensions.

The violence has raised fears of a return to full-blown intercommunal conflict in a country where ethnic Kurds, majority Shi’ites and Sunni Muslims have yet to find a stable way of sharing power.

In Baghdad’s Shi’ite stronghold of Sadr city, police and witnesses said a minivan drew up to a group of men waiting by the side of the road for day work, and the driver told them to get in before detonating an explosive device in the vehicle.

“The driver asked laborers to get into the van, then he disappeared and minutes later the truck exploded, flinging the laborers’ bodies back,” said Yahya Ali, a worker who was standing nearby.

“Somebody tell me please why poor laborers are targeted? They want only to take food to their families!”

Monday’s attacks underscore deteriorating security in Iraq, where nearly 4,000 people have been killed since the start of the year, said violence monitoring group Iraq Body Count. In July, more than 810 people were killed in militant attacks.

“I am deeply concerned about the heightened level of violence which carries the danger that the country falls back into sectarian strife,” said acting United Nations envoy to Iraq, Gyorgy Busztin.

“Iraq is bleeding from random violence, which sadly reached record heights during the holy month of Ramadan.”

At least 10 people were killed when two car bombs blew up near a bus station in the city of Kut, 150 km (95 miles) southeast of the capital, police said.

Four more were killed in a blast in the town of Mahmoudiya, about 30 km (20 miles) south of Baghdad, and two bombs in Samawa, further south, killed two.

The rest of the bombings took place across Baghdad, in the districts of Habibiya, Hurriya, Bayaa, Ur, Shurta, Kadhimiya, Risala, Tobchi and Abu Dsheer.

An assault on Abu Ghraib prison last week raised questions about the ability of Iraq’s security services to combat al Qaeda, which has been regrouping and striking with a ferocity not seen in years.

“Today’s attacks are closely linked with the Taji and Abu Ghraib prison breaks, which have encouraged terrorist groups to launch further attacks in areas of a specific sect to put more pressure on the government and undermine security force morale”, Hakim Al-Zamili, a senior member of the security and defense committee in parliament, told Reuters.

Insurgents have been recruiting from the country’s Sunni minority, which increasingly resents Shi’ite domination since the U.S.-led invasion toppled Saddam Hussein, a Sunni, in 2003.

The Syrian conflict has drawn Shi’ites and Sunnis from Iraq and beyond into battle against each other.

On Monday, a roadside bomb killed a senior police officer, his aide and two guards when it hit their convoy near Baiji, 180 km (112 miles) north of the capital, and five roadside bombs targeted a police patrol in Baghdad’s Palestine Street.