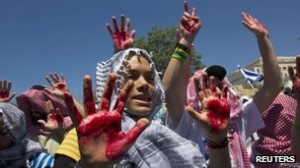 The Israeli cabinet has approved a bill requiring any peace deal with the Palestinians to be put to a referendum.

A statement from Prime Minister Benjamin Netanyahu’s office said that it was “important that on such historic decisions every citizen should vote directly”.

The cabinet has also been discussing a controversial proposal by the PM to free a number of Palestinian prisoners.

The release forms part of US-backed efforts to resume the peace process.

‘Tough decisions’
The Israeli government will seek “urgent and important” approval for the referendum bill, asking parliament to fast-track its passage.

“Any agreement which may be reached in negotiations will be put to a referendum,” Mr Netanyahu’s office said.

The bill is seen as a conciliatory gesture to right-wing members of the government who are wary of concessions Israel might have to make during peace process negotiations.

The issue of the release of the prisoners, some of whom have carried out militant attacks that claimed Israeli lives, has proved more difficult for the PM.

Sunday’s cabinet meeting was delayed by an hour as he sought support.

“But there are moments in which tough decisions must be made for the good of the nation and this is one of those moments.”

Ahead of the meeting, Deputy Defence Minister Danny Danon condemned the proposal, telling Israel Radio: “This is a political mistake, it is an ethical mistake. The message we are sending the terrorists is that we eventually free them as heroes.”

But Kadoura Fares, the head of a Palestinian advocacy group for prisoners, said that there would be “no negotiations unless they are all released”.

It has been suggested by Palestinian sources, although not confirmed officially, that peace talks could start again in the US next week. The negotiations have been stalled since 2010.

US Secretary of State John Kerry announced on 19 July that the talks would begin “in the next week or so”.

He said the parties had “reached an agreement that establishes a basis for resuming direct final status negotiations between the Palestinians and the Israelis”.

The Palestinians have insisted Israel recognise pre-1967 ceasefire lines as borders of a Palestinian state, subject to some negotiation, before any talks commence, but this is something that has been opposed by right-wing members of Mr Netanyahu’s coalition.

The issue of settlement-building halted the last direct talks in September 2010.

Palestinian President Mahmoud Abbas has said he will also put any peace deal to a referendum.
BBC

Photo: Israelis opposed to the release of Palestinian prisoners protested outside the PM’s office