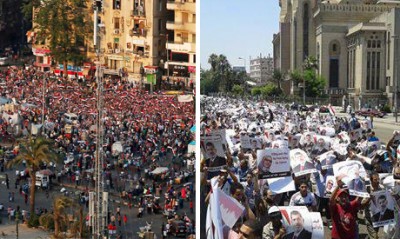 Egypt’s political divisions seethed Friday as rival rallies between opponents and supporters of deposed president Mohamed Morsi surged through cities, and the army increased pressure on Islamists to abandon a month-long sit-in outside a Cairo mosque.

The allegations infuriated tens of thousands of Morsi’s Islamist supporters, who cursed the military and chanted “God is great.”

Anti-Morsi protesters crowded into Cairo’s Tahrir Square to support the coup that overthrew the former president on July 3 and to rally for an anticipated military crackdown on Morsi’s backers, including his Muslim Brotherhood movement. The military’s provocative call for harsher measures against the Islamists could tilt the nation toward civil war.

Police fired tear gas to break up scuffles in the coastal city of Alexandria. Skirmishes were also reported in Cairo, and the Health Ministry reported that 24 people had been injured.

More than 10 people have been killed in clashes in recent days. The nation’s conflicting passions are punctuated by street fighting and defined by dueling images: Islamists holding up posters of Morsi, and protesters backing the military waving banners of Gen. Abdel Fattah Sisi, commander of Egypt’s armed forces.

“Morsi should have left office quietly and with dignity,” said Eman Abdelhamid, a former nurse standing in Tahrir. “But the Brotherhood’s greed, lack of understanding and the deals they made with the outside world to destroy our country have unfortunately led us here.”

“Morsi should have left office quietly and with dignity,” said Eman Abdelhamid, a former nurse standing in Tahrir. “But the Brotherhood’s greed, lack of understanding and the deals they made with the outside world to destroy our country have unfortunately led us here.”

Another protester in Tahrir, Adel Mohammed, said marchers were preparing to leave the square and head across the city to the Rabaa Al Adawiya mosque, where pro-Morsi demonstrators have been camped.

“Today is the last day for the Muslim Brotherhood in Rabaa,” said Mohammed. “There is a plan to surround their sit-in, and neighbors in the buildings around them will stand on their balconies and ask them to leave…. I’m certainly expecting violence.”

Sisi’s comments this week against what he called “terrorism and violence” have set the mood for a showdown. Military helicopters, which have been buzzing Cairo for days, dropped leaflets on Islamists at the Rabaa Al Adawiya mosque.

“Everything the armed forces do is for you [citizens] and holds no resentment for religion or humanity, or any threat to life or freedom. So join us hand in hand,” the leaflets read. “We are not your enemies, and you are not ours. We support you so you may support your country and not raise your weapon against your brother, or destroy, or burn. But we must be together all of us against killing and violence and terrorism.”

As protesters on both sides were massing earlier in the day, Egypt’s official news agency reported a court had ordered Morsi be held for 15 days while prosecutors investigate charges that in 2011 he conspired with Hamas, the Palestinian radical group that controls the Gaza Strip, to attack police stations and jails, “setting fire to one prison and enabling inmates to flee, including himself, as well as premeditated killing of officers, soldiers and prisoners.”

The charges stem from a prison escape by Morsi and other political prisoners, including members of the Brotherhood, during the uprising that toppled Hosni Mubarak in 2011. The accusations have been discussed in judiciary circles for months. They have gained traction as the army seeks to impose order, marginalize the Brotherhood and move beyond more than two years of political division.

Morsi had said in an earlier television interview that unknown men had freed him and other Brotherhood members from Wadi Natroun prison. The criminal charges are widely seen as politically motivated. But they appear to give the army a legal basis to detain the president amid growing international criticism that Morsi has been held incommunicado for nearly one month.

“At the end of the day, we know all of these charges are nothing more than the fantasy of a few army generals and a military dictatorship,” Brotherhood spokesman Gehad Haddad told reporters. “We are continuing our protests on the streets.”

In an ominous statement suggesting possible violence, an army official told Reuters: “We will not initiate any move, but will definitely react harshly against any calls for violence or black terrorism from Brotherhood leaders or their supporters.”