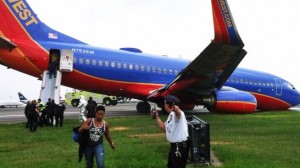 The front landing gear on a Boeing 737 collapsed as the plane touched down at LaGuardia Airport Monday, causing the aircraft to skid and spark along the runway, according to witnesses, injuring as many as 10 people.

Passengers on the Southwest Airlines flight from Nashville, Tenn. evacuated the plane on emergency chutes just after the landing. The plane came to a stop in a grassy area on runway 4 after the nose gear collapsed, officials said.

The plane was carrying 149 passengers and crew, and there may have been an additional non-ticketed child on a passenger’s lap, putting the total number of people on board at 150.

Ten people, including passengers and flight attendants, were treated by medical personnel at the scene for anxiety attacks and some minor bumps and bruises, according to Thomas Bosco, general manager at LaGuardia Airport. Four refused further medical attention, and six were transported to a hospital.

The flight crew was also taken to a hospital for observation, and a Port Authority police officer was treated at the scene for heat exhaustion, Bosco said.

Steve Czech was on the runway waiting for his American Airlines flight to take off when he saw the Southwest plane touch down.

“There was just this fireball going down the runway. It was unbelievable — it was probably 300 yards from us, if that,” he said. “Clearly there was no nose gear. It was just screeching down the runway, fire on both sides. There was debris kind of rolling off to the sides.”

Czech said passengers on his flight shrieked as they watched.

“I was concerned, obviously, about the people on the plane. And then when I saw the debris rolling off, I was wondering if we were going to be in the debris field and get hit by some of the debris,” he said.

Melina Andujar and her husband saw the plane approach the runway, and say they knew something was wrong.

“My husband noticed it was out of shape, like it wasn’t supposed to land that way,” she said. “He said, ‘Oh, my God, I think something’s wrong.'”

“The front wheel didn’t come out, and it landed on its nose and it started skidding,” said Andujar, who saw sparks fly as the plane landed.

The plane ended up on a grassy area about halfway down runway 4, between the runway and a taxiway, said Bosco.

Sam Brock, an NBC Bay Area reporter, was on another plane next to the Southwest aircraft on the runway when it landed. The Asiana crash in San Francisco earlier this month made passengers jittery, he said.

“I think a lot of people had nerves that were rattled. As soon as it was clear that there was something going on, everybody on one side of the plane rushed to the other to take a look, obviously hoping we weren’t seeing some sort of repeat of what happened at SFO,” he said.

That’s when they saw the Southwest plane on the ground.

The plane’s emergency chutes were deployed, and passengers slid down the chutes “in an orderly fashion,” according to Bosco.

“The nose of the airplane was on the ground so there was an unusual latitude. That was the best and safest way to get people off,” he said.

The Port Authority Police Department’s aircraft rescue team and emergency medical responders were on the scene, but “at no point in the process did it seem like there were any serious injuries or any immediacy with respect to the emergency response,” Brock observed.

NTSB investigators were on the scene gathering more information and assessing the damage.

“As soon as NTSB gives us the OK, we will start to clear the runway of debris,” said Bosco.

Airport officials were working with Southwest to move the plane from the grassy area, then assess the physical damage.

The airport is aiming to reopen the runway by Tuesday morning, Bosco said. Passengers traveling through LaGuardia should check if their flights are canceled or delayed.